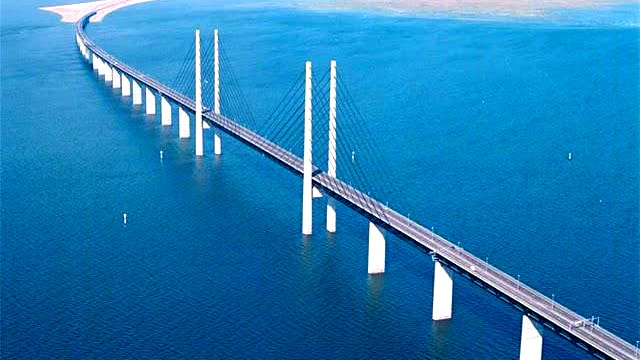 Denmark is an island nation and this means taking ferries or crossing bridges if you want to go places by car or motor-cycle (fares may apply for these services). We suggest you contact the ferry companies directly for information on timetables and fares as these vary greatly.

If you are travelling by ferry during July or up to a weekend, it is a good idea (but not compulsory) to book ferry tickets in advance – this may save you a long and dreary wait in your car at the ferry terminal.

DOMESTIC:
The island of Bornholm is serviced by a ferry leaving from Køge approximately 40 kms south of Copenhagen. Phone 56 95 18 66

The Great Belt Bridge (Storebæltsbroen), one of the longest suspension bridges in the world, connect Eastern and Western Denmark at Korsør approximately 1,5 hours drive south/west of the city. Car toll is DKK235 one way.

INTERNATIONAL:
*Sweden - The Øresund Bridge connects Copenhagen with Malmø, Sweden. The bridge is reached by following the signs towards the airport and/or Malmø. Read more about prices at the website.

*Germany - There are ferries to Puttgarten, Germany, every 30 mins. 24 hours a day, 7 days a week. This ferry departs from Rødbyhavn, near Rødby approximately 2 hours drive south of Copenhagen.

*Norway - From Copenhagen there are daily ferries to Oslo, Norway. This ferry carries cars and leave from the new ferry terminal in the northern part of Copenhagen. For information on the Oslo Ferry, DFDS, phone 33 42 30 80.

Public transportation: From the airport arrivals hall, DSB (Danish State Railways) trains leave every 10 minutes. It takes approximately 15 minutes to reach the Central Station. From there you can take a taxi to the pier. You can also stay on the train for another 3 minutes and get off at the Østerport Station. From outside Østerport Station, bus number 26 to the Langelinie Pier departs every 20 minutes. The bus ride to Langelinie from the station takes approximately 5 minutes. The total trip will cost DKK 36 (about US$7).

On foot: In less than 30 minutes, you can walk to the city center from Langelinie Pier. Along the way, you'll pass some of the city's best-known attractions: The Little Mermaid, a Copenhagen landmark, is a bronze statue depicting the famous Hans Christian Andersen fairy-tale character; Amalienborg Palace (since 1751, the residence of the Royal Family featuring the Changing of the Guard at noon), and the charming canal street known as Nyhavn with its colorful old wooden schooners, outdoor restaurants, and sailors' bars lining the canal. At Nyhavn, you can even hop on a 50-minute canal cruise for DKK70 (about US$12). Continue across Kongens Nytorv square, at the end of the harbour, to reach Europe's longest pedestrian mall/street, Strøget.
By bus: Bus number 26 leaves every 20 minutes from the Langelinie Pier. It takes approximately 15 minutes to the city center and costs DKK 24 (about US$4) The ticket is good for one hour should you decide to transfer buses. Note: You can change small amounts of currency at the Cruise Information Center, located pierside.
By waterbus: You can get to the city center by the waterbus departing from the polar bear statue at the end of the pier. A one-day ticket costs DKK70 (about US$12). You can hop on and off as you please.
By taxi: Taxi fares are approximately DKK100 (about US$18-$20). The ride to the city centre takes approximately 5-10 minutes, depending on traffic.

How do I get from the Freeport Terminal to the City-centre?

On foot: Walking from the Freeport to the city center takes about an hour, and it's a pleasant walk.
Shuttle: Shuttle buses are usually right outside the vessels. Contact your cruise line directly for information.
Taxi: Taxi fares are approximately DKK100-150 (about US$20-$30). Depending on the traffic, the trip will take about 10-15 minutes.
By bus: Bus no 26 leaves from Freeport every 20 minutes on week days. The ride to the city centre takes approximately 20 minutes and costs DKK24 (about US$4).
By train: From Nordhavn station. It takes 10 minutes to the city centre and costs DKK24 (about US$4).