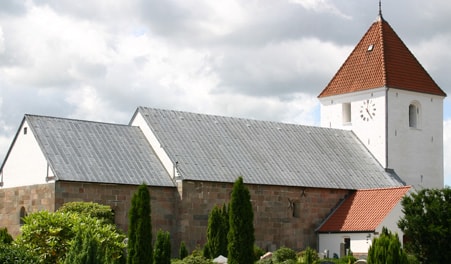 In the days of Catholiscism the church was dedicated to the Holy Mother. It was built around 1180 and consists of chancel, nave, a late-Gothic west tower and porch to the north.

The inside of the walled up southern door is rectangular and the outside rounded with a projecting cordon.
In 1904 murals from around 1550 were exposed on the chancel wall and the vault of the nave showing subjects from the Old and the New Testaments and inscriptions in Danish.

In the porch can be seen a runic stone carrying the epitaph: "Toste ans Asbjørn erected this stone after Tue brother...". The stone also showa a picture of a ship.
The altarpice shows the Holy Lord painted by Mølgaard Andersen in 1943.