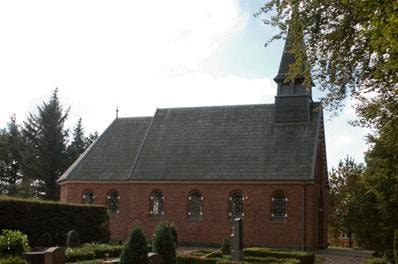 The small Hjardemål Klit Church is located on the outskirts of Hjardemål Plantage near Hanstholm in Thy.

The church was built in 1895 on this remote site because the sand escape in the mid-1890s had come under control and the population of the site was increasing.

Kontakt: Henning Lund, Noerrevej 2, 7700 Thisted, Tlf. 97995280. Hjardemaal Klit got its own church in1895. The organ and altarpiece were donated by Peder P. Hedegaard, a wholesaler and company director who grew up in the parish. Among the graves is RAF Pilot Officer Murray Anderson Butler burried. The pilot was shot down during Second World War.

Hjardemål Dune got it's church in 1895. The organ and altar were donated by the recent merchant and director Peder P. Hedegaard, who grew up in the area.

M. A. Butler was the navigator on a plane that was on a mission, on June 8th 1940. It was to follow the German cruiser "Scharenhorst ', which got into a battle between the British aircraft carrier 'Glorious' and destroyers 'Ardent' and 'Acasta'. The three British ships sank, and the plane was shot down. The four-man crew on the plane died. Two were never found, but the fourth member of the crew ashore in Norway and is buried in Haugesund.