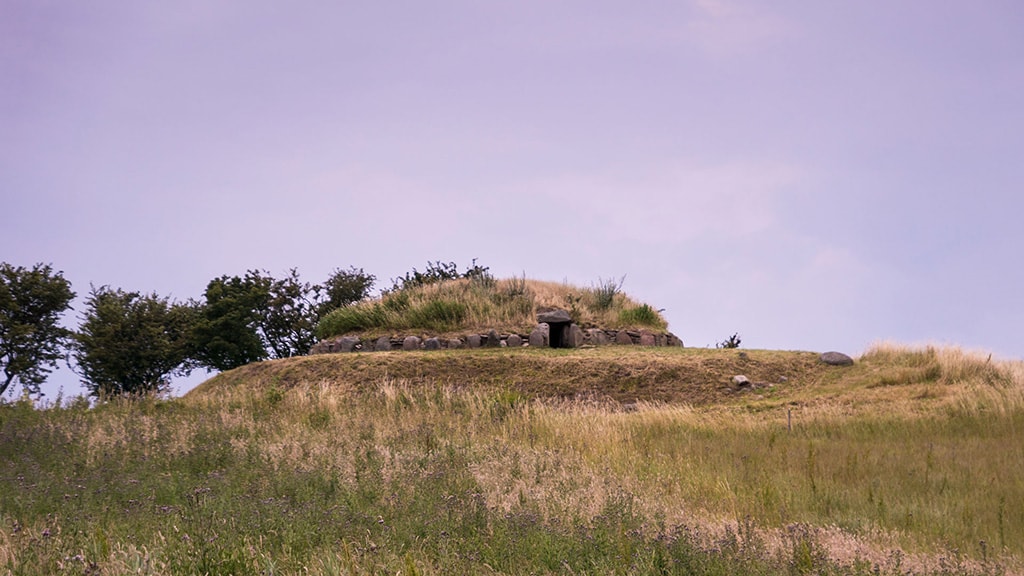 Experience the finest burial chamber on Langeland built 5-7000 years ago. Crawl into the darkness to see this monumental building from the Stone Age.

You´ll find this amazing passage grave on South Langeland located on a hill top a little east of Bagenkop.

Remains of at least 53 humans
During the excavation, heavy bone mounds and rich finds of objects of clay, flint, bone and amber were found in the south end and inner part of the chamber. Studies of the bone material could tell that there were remains of at least 53 people, 17 of whom were children. Using carbon-14 dating, it could also be established that the people whose bones were placed in the burial chamber did not live at the same time, ie. that the burial chamber had been used over a long period, probably over many centuries from its construction at the end of the 4th millennium BC.

Dental surgery
Among the individual finds, two skulls were particularly interesting. In one of the lower jaws there were several teeth left and one of the cheek teeth had a hole! The hole was 4 mm in diameter and 6 mm deep and in all probability made with a flint drill: With modern scanning equipment, one could detect the characteristic round scratches that a rotating drill makes. The patient's teeth had severe caries attacks and a chronic inflammatory condition which has been very painful. The operation has probably had to alleviate the pain. In a contemporary attempt to repeat the procedure on another tooth, it took five and a half minutes to complete it!

Did it help then - this extensive intervention? Yes, of course we do not know if the patient became pain free after the drilling, but we know at least that he lived some time after that. From several scans it could be seen that tartar had formed on the surface of the hole itself. And that can only have happened while the patient was alive. The find is Denmark's oldest tooth bore.

Trepanation
The second skull, which was especially interesting, also had a hole, but here in the skull itself, a little above the temple. Probably a hole was made in the room to relieve the pressure on the brain after an injury. Whether it has been after an accident or after a blow, we do not know, but the hole sits in front on the left side, which corresponds to injury after a blow from a right-handed person. The intervention is called a trepanation and is known from several finds from the Stone Age. The edges of the hole show new bone mass formation - therefore we can also say here that the patient not only survived the operation, but actually also lived some time after it.

Both skulls are exhibited at Langelands Museum at Jens Winthers Vej 12 in Rudkøbing.

The graveyard was restored after the investigation. The missing pavement was replaced by granite blocks previously used by the road authority!