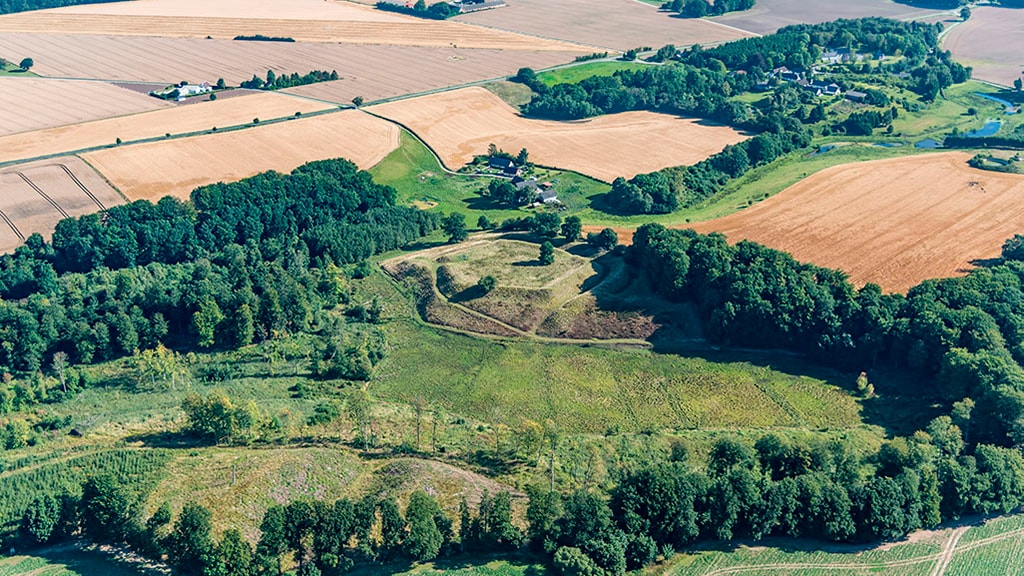 The sword splinters the shields in the battle for Denmark. One of the places that was fortified in the early days was Magelund, one of Denmark’s strongest and thus most important strongholds. See its remains and its successor, Lykkesholm Manor, scenically situated in a tunnel valley surrounded by woodland and lake.

Lykkesholm Manor is scenically situated at the end of a tunnel valley by a lake surrounded by woodland. In a branch of the valley lies Lykkesholm’s predecessor, Magelund Voldsted, the site of one of Denmark’s largest and strongest fortified castle ramparts from the Middle Ages. A large fortress once stood here, but only the impressive ramparts remain today. The castle rampart is 15 m high and 70 m long. To the south and east, there are large earth ramparts, and to the north and west, there once was a lake. The castle rampart has been cleared of woodland and today, grazing sheep ensure that the area remains free of trees and bushes, allowing a clear view of the ancient monument.

The ramparts and the castle are thought to have been built at the end of the 12th century and are first mentioned in 1329, when they were reinforced due to the unsettled times. The kingdom was on the verge of collapse, due to power struggles between the king and his noblemen.

In the mid-14th century, when King Valdemar had settled his score with the Counts of Holstein, he turned on the Danish magnates, and many castles were destroyed in the process. His daughter, Queen Margrethe 1st., followed in her father’s footsteps. Any castles and fortifications that did not belong to the crown or that were not owned by loyal subjects, had to go. In 1391, Queen Margrethe 1st.  acquired the castle Magelund, which she made over to her loyal squire Henneke Olufsen Bjørn.

Magelund is similar to other ramparts such as Søbygård on the island of Ærø, Ørkild in Svendborg and Hindsgavl near Middelfart.

There is access to the castle rampart through gates in the fence. Sheep roam freely in the area.