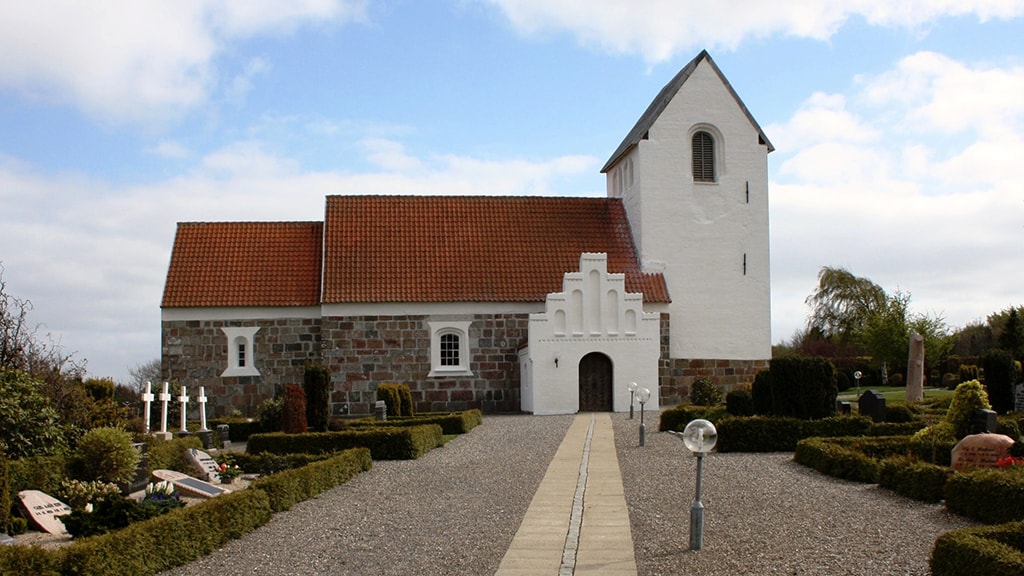 The church of Odby takes shelter from the hills to the south. It was built about the year 1200. When the tower was added at the end of the 1500s, it reached high enough to be able to greet its "sisters" south of the Limfjorden at Humlum and Nr. Nissum.

In the tower are two bells. The older one is from the second half of the 1300s. The other bell was donated to the church in 1896.

The porch of more recent date has a crenellated gable. In the northern side of the chancel a Romanesque window has been preserved. Here on the northern side of the aisle, just below the roof, is an ashlar that originates from the Communion table, as it has a small hollow which is a reliquary in which has been kept bones of St. Mauritius, the patron saint of the church of Odby. The well of St. Mauritius springs in the hills at the Serup beach.

The black painted oak wood door of the church carries the year 1751. Inside the church the first thing to catch your eye is the modern decoration by the church artist Bodil Kaalund. The double sections of the organ loft show from left to the right: The Annunciation of the Virgin Mary, The presentation of Jesus in the Temple, being blessed by Simon and Anne. The centre section shows "and there shall come forth a rod of the stem of Jesse". Then "The Sermon on the Mount", and in the last two sections: the women by the grave on Easter morning. The sections of the pulpit have symbolic motifs from the service. They are from left to right: ear of corn, a dove, living water, and a bunch of grapes.

On the north wall is a beautiful tablet with the names of all the vicars of the parish since the Reformation. On the same wall a crucifix hangs strongly emphasising the Agony. It is from the 1400s and reveals that in the time before the Reformation there was a strong penitential piety in the people.

The small ship's model of the Limfjord-bark "Marie", hanging in the aisle, was donated in the early 1930s.

The brass chandelier, placed before the arch of the chancel, was donated to the church in the first half of the 1700s by the wife of Major Kraft in return for her recovery in the St. Mauritius Well. The Renaissance altar-piece from about 1600 has a painting of our Saviour on the cross, and a man kneeling at the foot of the cross. It was painted in 1910 by A. Dorph and is a characteristic expression of the personal understanding of Christianity during the era of revival. On the Communion table are two heavy brass candlesticks with the donators' names and the year 1641 engraved. The seven-branched candlestick in the centre was donated in 1933 in memory of a married couple in the parish of Odby.

The church and churchyard of Odby carry some remembrances on wars which Denmark has taken part in. To the left of the exit, under the organ loft is a shield telling about the fate of a young soldier from the parish, Jens Jespersen, who was wounded at Dybbøl in 1864 and who died a few days later at a hospital in Copenhagen. In the churchyard towards the north near the eastern wall there is a stone over a young soldier from the Vejle area. He had lived through all the dangers of the 1864 war only, as appointed guard at Oddesund, to die of an ordinary illness.

South west of the tower a British airman was buried. His bomber was shot down over Nissum Bredning in 1943. As he could not be identified, the unknown soldier's tombstone was set up on his grave after the war.