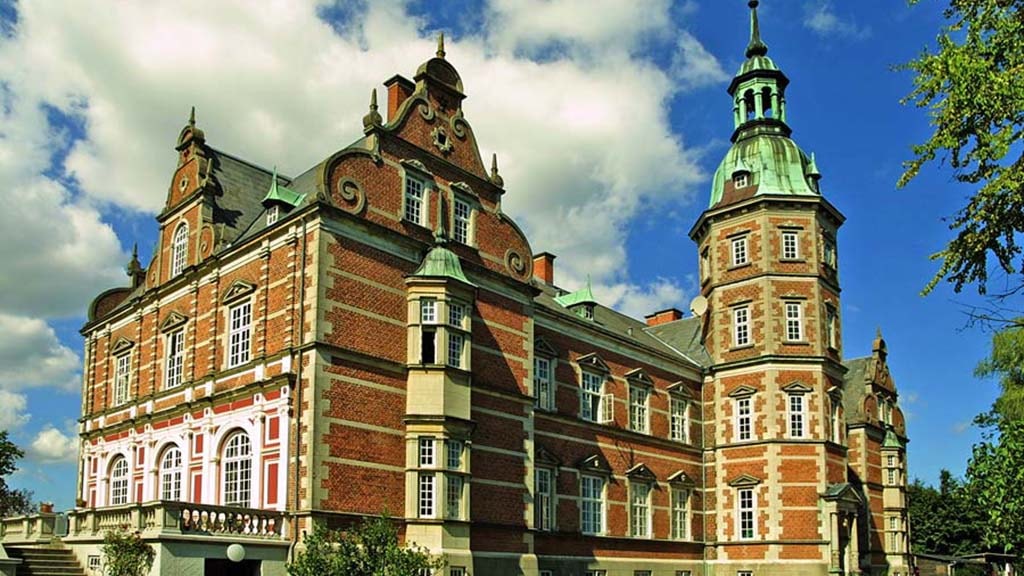 A stately manor house with enormous significance for the polders and reclaiming of Odense Fjord!

Østruplund is a beautiful manor house in North Funen. The building is privately owned, but you can admire the beautiful building from the road.

Østruplund was a manor house under the name Østrupgård. It was the main farm in the Østrup village from the 1400s and had good grain fields.

Østrupgård has had many owners who built several main buildings over the years. Poul Skinkel built a main building in the middle of the 16th century. It was replaced in 1812 by a three-piece timber-framed building.

The current main building is from the late 1800s. It is a beautiful two-storey building with a high basement. It was built of red brick with a black slate roof and boasts a four-storey octagonal tower.

One of the owners of Østrupgård has had a huge influence on the reclaiming of the areas at Odense Fjord. Elias Møller (born 1761) was the son of a farmer and became a manager at Østrupgaard. When the owner died, he married the owner's widow after a few years and became a landowner. He bought up land and, in collaboration with other landowners, reclaimed a small cove at Gerskov in 1809 and an area between Ølund and Lammesø in 1811. In 1818, Elias Møller reclaimed Egense Fjord. It was at around 600 hectares, thus it was at that time Denmark's largest containment. Elias Møller was honored with the Agricultural Society's Gold Medal in 1820 and a visit from Prince Christian Frederik, the governor of Funen.

Elias Møller made Østrupgård an entailed estate, which was owned by the Møller family until 1921. The main building was sold from the agricultural fields, and Østrupgård changed its name to Østruplund in 1941 when the state bought the building.

Today, Østruplund is a home for adults with mental disabilities who are criminals or have behavioral problems.