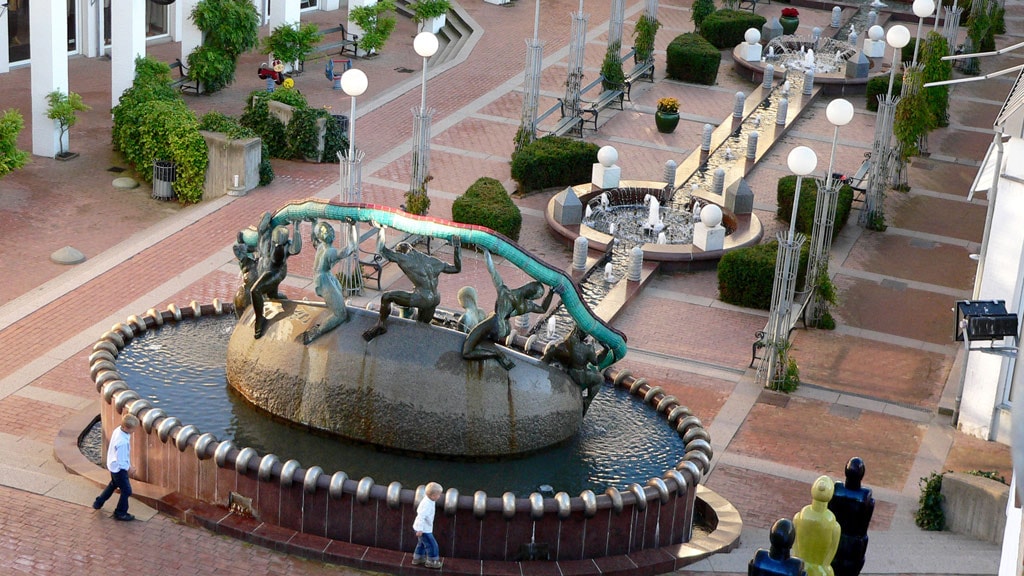 Sculpture Park:
In the urban district of Hjørring there are approx. 160 sculptures. Compared to the whole of Denmark, Hjørring has the highest number of sculptures per inhabitant.

Please obtain a list of the various artists and craftsmen at Hjørring Touristservice.

Pride of the town:
P. Nørkjærs Plads (Square): The sculptures at P. Nørkjærs Plads, which may be regarded as the centre of sculptural diversity within the urban district of Hjørring, have been created by the artist, Bjørn Nørgaard. Art is a corner of creation itself expressed through the mind of an artist. Art and trade have always gone hand in hand – partly because art was dependent on trade in order to survive, but also because people always showed an interest in purchasing pieces of art. Thus, art and trade have played an equal part in creating P. Nørkjærs Plads in the centre of Hjørring and also in making this an international attraction.

The art at P. Nørkjærs Plads is expressed through the mind of Professor Bjørn Nørgaard and has been created from stone and water, the two fundamental elements of the earth. The various sculptures work together as a unified whole and express both Christianity and Nordic mythology. The main element here is the giant granite block on which a sculpture of the two-headed Midgard Serpent (Nordic mythology) is carried by six bronze figures (a map of the world) symbolizing the duplicity of people. The Midgard Serpent spews its poison at Loke while Sygum tries to catch the poison in a bowl (both are figures of Nordic mythology). A sculpture representing a Christian priest/shepherd has been placed in the fountain together with figures of Nordic mythology. The fountain is surrounded by 13 female and male figures of which the central figure is a golden image of Christ. A little stream runs through the square showing the ocean’s journey through life. Small granite pillars have been put up on each side of the stream symbolizing the fixed points in one’s life. The 4.5-metre high obelisk symbolizes the sovereign, whose power has, however, been restricted by shortening the obelisk. The bronze head at the top of the obelisk could be an image of St. John the Baptist, Judas or even one of us…. When you go shopping, please do set aside some time to view the sculptures at the square where you will feel the elevated tranquillity of the place, as well as refreshing your mind it will give you a chance to ponder on the diversity of life itself - the many conflicts and solutions and people’s faith and hope for a future in which trade and art will continue to walk hand in hand.