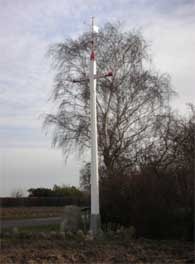 During the feud of the counts (around 1530) the farmers from the hamlet of Frejlev killed the bailiff to the vassal of the local frudal overlord. By a "dscision of the Lords" of 17th June 1533 referred the vassal to Aalholm to sue the farmers at the set court as well as at the national court.
The penalty was 12 pairs of oxen with red ears. Since, however, only 11 pairs could be procured, the farmers painted the ears red of one pair of entirely white oxen.
The fraud was descovered, and as a punishment - and as a reminder of their roguishnes, the farmers were sentenced to set up a cross at the road leading to the forest.
Share your wonders:
Our sites
Media
Help
VisitDenmark © 2020
Data Protection NoticeCookie Policy
English