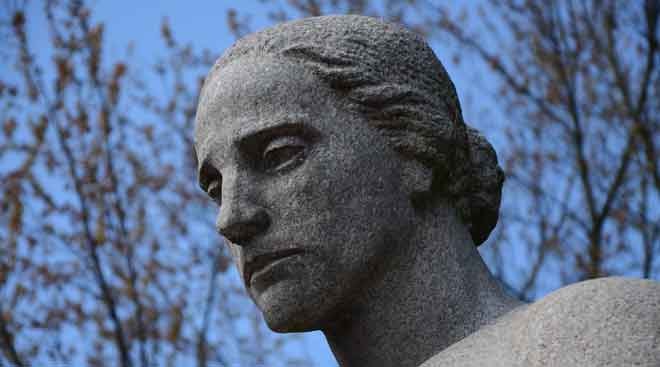 Ryvangen Memorial Park (Mindelunden) in Hellerup on the outskirts of Copenhagen is a beautiful park commemorating the Danish freedom fighters who were executed here or elsewhere, or died in German concentration camps, during World War II.

The Memorial Park is located on the former military training grounds used by Svanemøllen Barracks. During World War II - on 29 August 1943 - the grounds were taken over by the Germans and used as accommodation for troops, and execution of the Danish Resistance.

After the war the bodies of 197 freedom fighters were discovered in this area, and it was only then the Danish public truly realised what terrible events had taken place on the site.

In Ryvangen Memorial Park you can stroll around between the three memorials and the original execution sites.

Danish sculptor Axel Poulsen's large sculpture of the mother of the slain son stands in the middle of the Great Grave Field. 106 people of the resistance are buried here.

Other resistance people's names are engraved on the plaque in front of the monument. At the foot of the statue is an inscription by Dane Kaj Munk.

The Memorial Wall to the left of the main entrance consists of plaques with the names of 151 people from the Danish Resistance, whose mortal remains have never been found.

Inside the Memorial Park you will find the original shooting range used by the Germans to execute Danish freedom fighters. They were picked up from Vestre Prison in Copenhagen in the early morning and driven to Ryvangen. Here they were tied to a pole and shot.

The original three wooden poles have been replaced by bronze ones, but you can see the original ones at the Museum of Danish Resistance in Copenhagen.

The Pistol Shooting Range, where the first executions took place, is located just outside the Memorial Park. The area is adjacent to some residencial buildings and allotments known as Ryparken.

From here the residents during the occupation could watch German soldiers arriving in large trucks with Danish civilians. Subsequently they would hear the sound of gunshots being fired. In front of the Pistol Shooting Range is a memorial.

The Anniversary of the Liberation of Denmark, 4 May, is celebrated every year with a ceremony and flowers on the graves. If you happen to be in Copenhagen that day, a visit is recommendable.

Please note that the Memorial Park is a state cemetery, and the seriousness of the site should be respected. Playing, dog walking, jogging, sunbathing and noisy behavior is thus not permitted.

All Wednesdays in the summer months (June, July and August), you can take part in a guided tour in English around Ryvangen Memorial Park. The tour is free, it begins at 15 and it lasts around an hour.