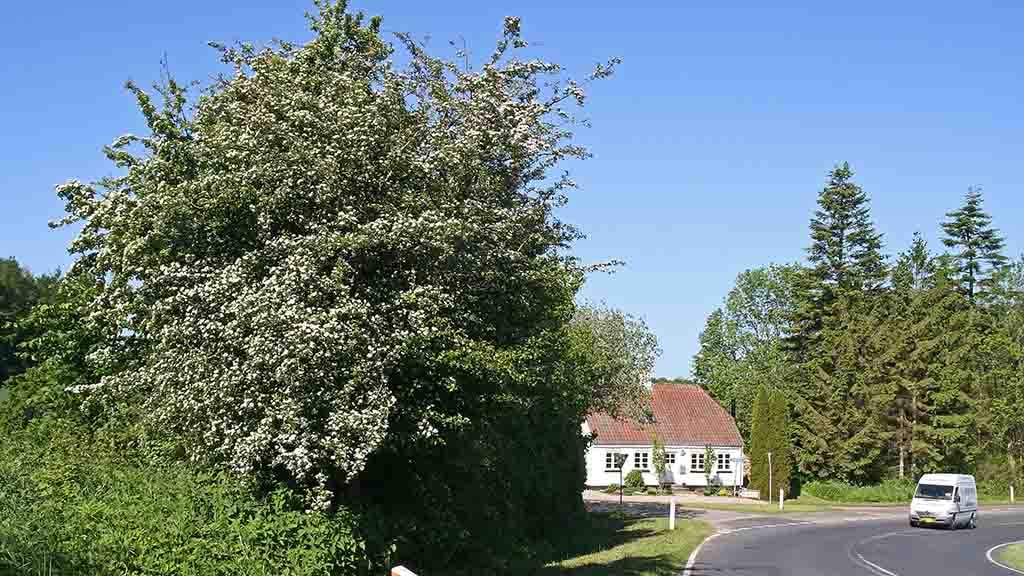 The waiting hawthorn at Rugårdsvej

The old hawthorn has seen both kings and queens and wizards and has been of great importance to the local farmers – it’s living history!

The Rugård manor has been owned by the king and was very important in the Middle Ages up to the 19th century. When the king sold the castle, it became a duty for the subsequent owners to drive for the royals, ie they had a duty to drive for the king and follow the court on their travels through Denmark.

At the so-called waiting hawthorn, which stood by Rugårdsvej, the farmers had to meet for the drive. The Danish kings often traveled around the kingdom, and many carriages were needed. Therefore, the farmers gathered in a loop until time for departure, and the farm close by is therefore called Venteløkke, the waiting loop. At that time, Rugårdsvej was a central main road over Funen, and it is the oldest main road over Funen - it is on a map from the 16th century, for example.

There has been a hawthorn in the same place on Rugårdsvej for more than 500 years, and it was so big that you could seek shelter under it. Both markets and a trial were held by the pond, and the famous and infamous wizard Lars Bøn Hahn and two witches were sentenced to death by King Frederik III in a trial on the spot. He could otherwise get plows to plow without horses, but now he was instead burned at the stake.

The large waiting thorn was felled in 1994, but new root shoots made the thorn survive, so the story is still alive!

See the beautiful view and imagine the atmosphere 500 years back.