Cycling is in the Danish DNA, it's a passion that sees nine out of 10 Danes owning a bike and using the network of urban and rural cycle routes that stretch the length and breadth of the country. Denmark's love of pedal power is set to get an even bigger boost when the country hosts the Grand Départ, the traditional first three stages of the legendary Tour de France, from 1-3 July 2022.

The event had been planned for June next year but has been rescheduled to July 2022 to avoid a clash with the rearranged Euro 2020 Football Tournament in Copenhagen.

Whilst stage one of the Grand Départ will still begin in the bike-friendly capital of Copenhagen, the lesser-known east Jutland town of Vejle has plenty to offer two-wheel enthusiasts. Vejle will be the starting point of the third stage of the Grand Départ, and a host of new cycling routes and initiatives makes it the ideal base to explore the region ahead of the race.

It's the area with the steepest roads, in an otherwise traditionally flat nation, and offers a chance to ride the country's toughest hill climbs, while also having plenty of family-friendly options too.

During the third stage of the Grand Départ the professional tour riders will follow a 182km course south on winding roads from the banks of the scenic Vejle Fjord to Sønderborg on the Danish/German border, passing through the UNESCO World Heritage sites Jelling Monuments near Vejle and the Moravian Church Settlement in Christiansfeld.

But visitors don't have to be part of the race to get the full Vejle area biking experiences as a series of routes are already open to the public and range from challenging, Alpine-grade ascents and mountain bike trails to softer options along open countryside and river inlets, lakes, forests and meadows. 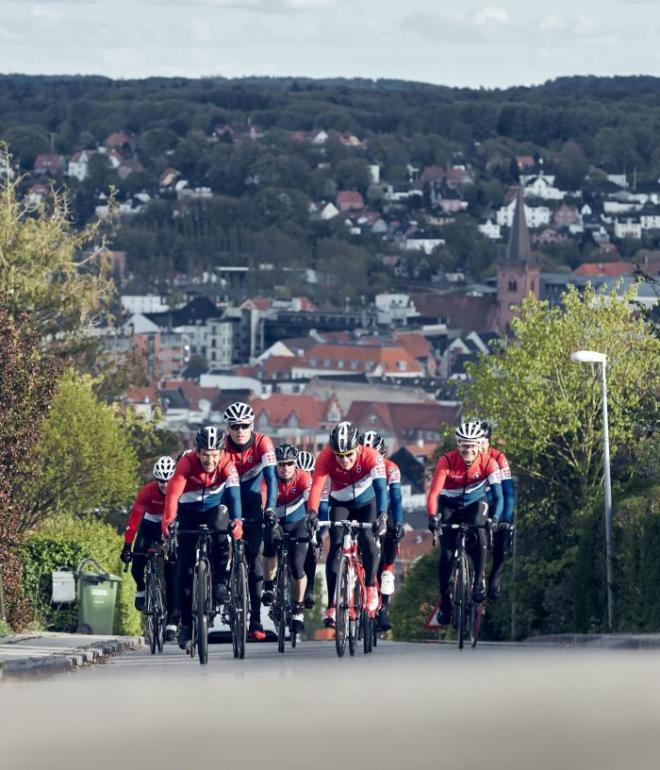 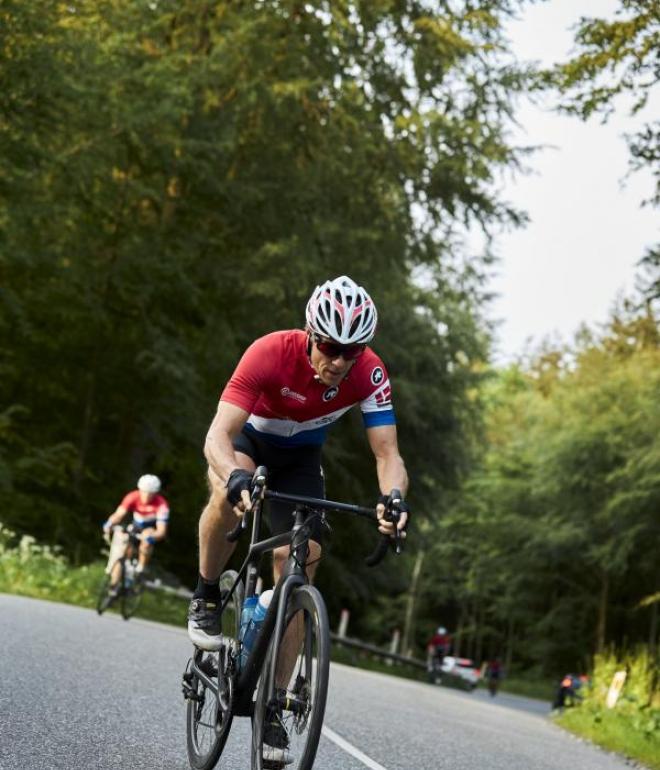 Enabling visitors to get ahead of the peloton a community based Bike Friends Network is a new scheme which is signposted by a series of small, red 'Bike Friend' symbols. The scheme has brought together over 30 participating hotels, attractions, shops and cafes in Vejle and the surrounding area with the aim of providing a little extra hospitality for its two wheeled guests.

Along the way there are places to get a repair kit or borrow a bicycle pump, maps to indicate the safest local bike routes and stops to take on water, buy refreshments or take a comfort break.

Varying in length and challenge, options include:

Denmark's undisputed toughest bike route, a 230 km trail with 3,000 thigh burning metres of total ascent. The route, which is on the outskirts of Vejle, offers several loops to reach all the hills in the Vejle Ådal valley whilst avoiding roads with heavy traffic and forms part of 16 new Super Routes across the region. These can be downloaded to a bike computer, allowing GPS to be the guide. The towns of Jelling, Børkop, Give and Egtved also offer their own Super Routes and with very different challenge levels on each of the routes, there is something for everyone.

In August 2020, the brand-new Vejle Bikepark opened in the forest of Sønderskoven.  The bike park has five different levels of difficulty ranging from 'easy' to 'extreme', including two-metre high jumps and almost 100 different challenges, and easy access nearby to an eight km Mountain bike track.

It is part of a further option to go off-road on a series of 12 signposted mountain bike tracks. Stretching over 58 km in total, one possibility is a route through the rolling woodlands of Nørreskoven on the outskirts of Vejle. The 5km route meanders along both sides of the steep gorge of Bybækken, looping in a figure of eight and features two different difficulty levels. The 3km blue loop is aimed at recreational mountain bikers, whilst the red loop has steep and very challenging assents and descents which are more suited for experienced riders to test their skills along serpentine downhill single-tracks requiring more technical know-how.

For a more leisurely ride cyclists can take a journey through Danish history on the Medieval Route from Jelling to Lunderskov. Pedaling through meadows and near ancient burial sites, the pathway follows the route of an historic thoroughfare for wayfarers and cattle drovers. On the 46km route visitors can visit Jelling, the UNESCO World Heritage site where the rune stones bear witness to the Viking Age and represent Denmark's 'birth certificate'.

Near Egtved is the Bronze age burial site and museum of the 'Egtved Girl' where the fascinating story of her life and death is told. Be sure to also take a break at Ravning Bridge, to see the few remains of Viking King Harald Bluetooth's 750m-long oak bridge, which he built to cross the Vejle Ådal valley.

Where to get bikes

Bike rental for adults and children is available at various places in Vejle town, as well as along the Vejle river and in Jelling. Rent a bike for a day for £10-£15 or mountain bikes for between £30-£55 per day.

You can also choose from a range of bike-friendly accommodation available through the Bed + Bike scheme.  Follow the blue Bed + Bike signs for additional services that include a safe place to store your bike overnight and the option to get tires pumped and to borrowing tools for repairs.

After a long day on the roads and nature tracks of Vejle, those in search of a great meal and a soothing spa treatment might opt to stay at Comwell Kellers Park Hotel an elegant stately home surrounded by acres of parkland.  Its newly renovated Aqua Spa has Denmark's first indoor sandy beach with light therapy treatment, an innovative 'Shower Walk' and choice of indoor and outdoor hot tubs.

For a culinary treat, head to the town's new gastronomical trailblazer, Restaurant Lyst, located in the landmark building Fjordenhus on the Vejle harbour front. Just as the building itself, the restaurant's interior and service are designed by Danish/Icelandic artist Olafur Eliasson. After a day on the saddle diners will be richly rewarded with a four-hour tasting menu consisting of twenty locally sourced servings affected by the four elements of air, fire, water, and earth.

There are currently flights with British Airways from Heathrow to Billund, and with Ryanair from Stansted to Aarhus and Billund and Manchester to Billund. Prices from £19.99 per person one way

Alternatively, there are flights via Copenhagen. SAS operates from Birmingham, Heathrow and Manchester. EasyJet from Bristol, Edinburgh, Gatwick and Manchester; and Norwegian from Edinburgh or from Gatwick to Aalborg and Billund. The drive from Copenhagen to Vejle is approximately 2.5 hours.