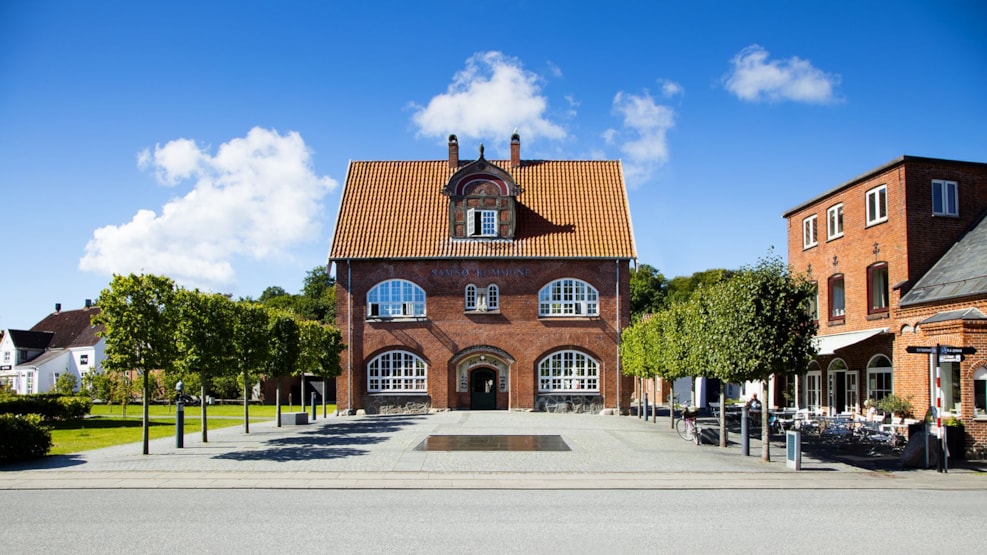 In 1900 the Samsø Craftsmen’s Union built a beautiful two-storey building in the centre of Tranebjerg, which for many years served as the island’s technical school. Later it was briefly used as a business school and then, for a period of more than forty years, as the island’s Town Hall. Now the building has been completely renovated and is the home of Samsø Tourist Information office, amongst other things.

Effective Craftsmen
Those Samsø craftsmen were smart, even back then, and they were ambitious. In April 1899, the Craftsmen’s Union agreed that the school should be built. Shares were sold, and other funding acquired, so the 15,000 crowns needed for construction were quickly in place. The architect was hired and in June 1900 the construction started. Only half a year later the whole building was ready, and the school was inaugurated amid great celebration.

The Famous Architect
Looking back to 1900, Anton Rosen had only graduated from the Art Academy eight years previously, and construction of Rosen’s House was one of the largest projects in which he had been involved. Stylistically he held nothing back, and there are many ornaments and details, both inside and outside that belong to the Art Nouveau style that fascinated Anton Rosen.

Later in his career, Anton Rosen became famous especially for the Palace Hotel in Copenhagen and the Tuborg administration and laboratory buildings. He was also recognised for being awarded both the Eckersberg Medal and the title of Titular Professor at the Art Academy, for his success as the main architect behind the National Exhibition in Aarhus in 1909.

The House today
In 2009 the island’s municipal administration moved out of Anton Rosen’s House. What remained was a building that was marked by over 100 years of use. With funds from both Realdania and The A. P. Møller and Chastine McKinney Møller Foundation for General Purposes, an extensive renovation of the whole house and the anterior square could begin, and at the end of November 2016 the house was again ready for new residents.

In the future the house will accommodate art exhibitions, a ceremonial room for civil marriages, meeting facilities and the island’s tourist information and marketing office.

You are very welcome
The Tourist Information office is open all year round on weekdays. Here holiday guests and all other visitors are welcome to pop in and get good advice about activities, accommodation, restaurants and much more. You can also buy great maps of the island, posters, books and a small selection of souvenirs. We look forward to seeing you in Anton Rosen’s House!