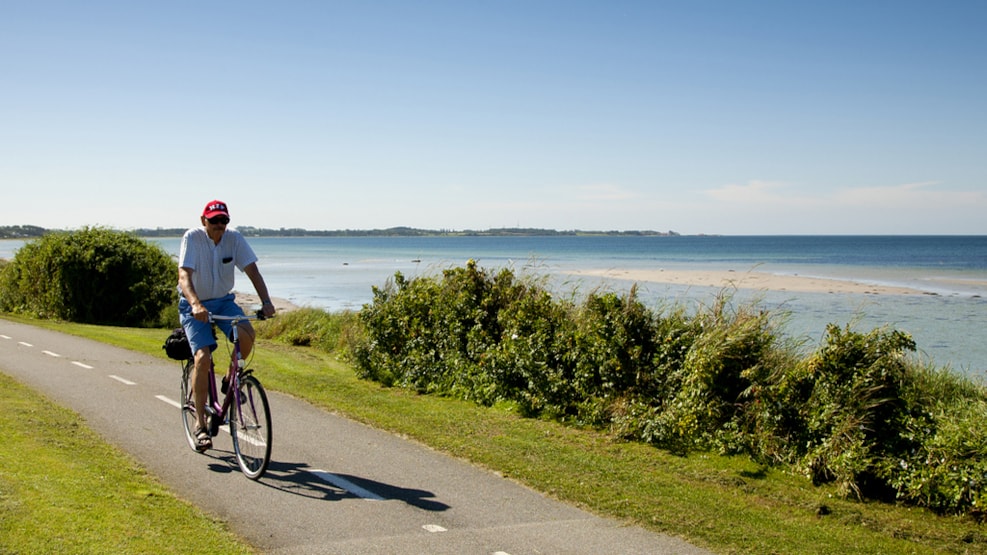 Bikeroute - The northern part of the island

Exit Tranebjerg heading towards Onsbjerg. In the outskirts of Tranebjerg you will pass Tinghuset (the police station) on your left. Farther ahead, on your left, you will see Kongehøjen (The King’s Mound) with a bronze memorial relief of Frederik VII, erected by the people of Samsø in 1866 as thanks for the June Constitution of 1849. From the top of the mound, there is a great view of the island.

The trip continues through Onsbjerg towards Sælvigbugten (Sælvig Bay), one of the best swimming beaches on the island. After passing the road to Sælvig Harbour, where the ferry departs for Jutland, you will see some hills with very narrow fields on your left. These are the remains of the division of the land that took place in earlier times to give the cottagers a share of the land. Shortly thereafter, in the turn towards Østerby you will see the Bisgård Forte road. A “forte” is a common road that the farmers used in the old days to transport animals to the pasturelands near the beach to graze. After exiting the plantation by the summerhouse area, near Bisgård Mark, you can see some Bronze Age mounds to your right.

When you reach the camping grounds, make a right towards Stauns and the airfield. A little inside the town, follow the road to your right. On your left, there is a pathway, Kastaniealléen, leading to the fjord. At the end of the road there is a small harbour – Stauns Harbour – where many people from Samsø keep their dinghies. From the harbour there is a path leading north along the fjord, in which you can see the large islet of Hjortsholm that contains the remains of an old castle from the Middle Ages.

Exiting Stauns heading north by the fjord road, you will quickly become aware of the pretty view of Stauns Fjord and the islets in and outside of the fjord. The nearest islands are called Sværm and Egholm.

By Kanhave you have reached the narrowest part of the island. This is where the Vikings built a channel in AD 726 connecting the fjord and the ocean to the west of Samsø. With access now to the ocean east and west of Samsø, a base in Stavns Fjord could control the waterways through both Storebælt and Lillebælt. The Vikings were in control and Samsø was the centre of the country. The channel is around 500 metres long, 11 metres wide and 1.25 metres deep. These days, there is no water in the channel but you can feel the presence of the Vikings beautifully illustrated by the silhouette of a Viking ship and a model of the edge of the channel.

You now are riding across the 600 hectares of Nordby Hede (Nordby Heath) that is located on the beach ridges and the elevated seabed. Today the heath is full of pine, spruce and birch; the remains of the original planting from 1866, the year in which the Hedeselskabet (The Heath Association) was formed.

A beautiful village with numerous small houses and farms. Halfway down the main street you will find the gallery of Samsø Kunstforening (The Samsø Art Association). Outside of Mårup, take a turn towards Nordby, where you can detour towards Mårup Harbour where there used to be a ferry crossing to Tunø and Hou.

On the way you will notice the church that appears in majestic solitude in the distance. Towards the west and northwest you will see the hills of Nordby Bakker, a peculiar moraine landscape from the Ice Age.

The isolated location of the church can be explained by the fact that there used to be two additional villages here (in addition to Nordby and Mårup); Søby and Glistrup.

The beautiful village pond dominates Nordby, with half-timbered houses surrounding it. In 1990, Nordby was named Denmark’s best-kept village, due to the many original half-timbered farm houses that have been maintained even though the farms moved onto the fields after the agrarian reforms.

The winding roads encircling the pond also breathe an air of authenticity. Close to the village pond you will see the bell tower where farmers used to gather for the town meeting. Nowadays, the bells still toll at sunrise and sunset because the church is located outside of hearing range of the town’s residents.

Facing the bell tower you can see the town’s old maypole and the building behind it containing a post office, a library and an exhibition about the parish. When you walk around, you cannot help but notice the old town wells with their red woodwork and gin wheels. Look into one of them and get a glimpse of the impressive stonewalls.

From Nordby, you have a good starting point from which to explore the hilly area of Nordby Bakker. The area is vast and there are a lot of beautiful places such as Langdalen, Ballebjerg, Møgelskår and Issehoved. On the way to Issehoved is the world’s biggest maze; A great experience for everyone.

From Nordby the trip passes through Nordby Hede (Nordby Heath). In the middle of the heath, take a turn towards Langør. This road will lead you past the ranger’s home where you can see a unique spreading of rocks in the fjord. The meadows and the fjord serve as breeding ground for thousands of birds.

From the hill near Langør Church there is a great view over the fjord, where you will gain great insight into the distinctive landscape. The islands in the fjord are “drowned” hills. Continuing on the road towards Langør you will pass Samsø Naturskole (Samsø Nature School) that hosts hundreds of nature activities throughout summer. Until 1880, Langør was Samsø’s most important harbour. It is a natural harbour with water that is 5 metres deep. The place was already mentioned in the Icelandic sagas as a suitable harbour. In the years 1801-14 and then again in 1832-1859, you would find lively traffic heading to the small island Kyholm that can be seen to the north-northeast behind the land spits.

Today, Kyholm is uninhabited but it used to have multiple purposes: it used to be a hospital for the treatment of the plague for Jutland during the Black Death 1709-1712, a manned base during the English Wars 1801-1814 and finally a quarantine station during the cholera epidemic in 1832-1859.

Two large redoubts – one on Lilleør and one on the tip of Besser Rev (Besser Reef) – guarded the entrance to the fjord and the waters east of Samsø during the English Wars. Both redoubts are visible from Langør.

The trip ends here, and the route then takes you back to Tranebjerg along Havvejen.

Route suggestions were originally published in a tourist leaflet by Samsø Turistforening in 1992. The present route suggestion is an updated version.