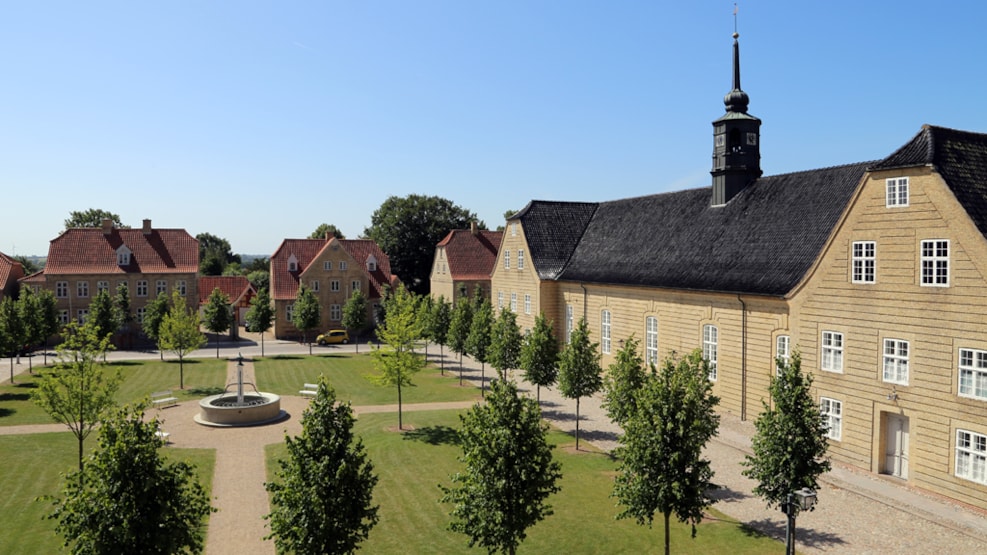 Christiansfeld is worth a visit, and the UNESCO-awarded city is a unique testimony to a cultural tradition that still exists.

On the 4th of July 2015 Christiansfeld was designated World Heritage by UNESCO. This designation is based on the UNESCO World Heritage Convention which purpose is to preserve exceptional nature and culture heritage in the world for future generations.

Christiansfeld is designated the World Heritage as a testimony surrounding a unique religious community and its establishment in Denmark. With its straight rectangular streets and the large church placed in the centre of the city Christiansfeld was and is still unique. Besides being the only city in Denmark with this character, Christiansfeld is the best-preserved city of similar cities in the world.

The church has active parishioners where some of the members' relatives go back to the first that travelled from Hernhut in Germany to build Christiansfeld.

Read more about the world heritage in Christiansfeld

The yearly wine-festival takes place the first weekend of August where Christiansfeld holds the cosiest festival in Denmark and the whole city is full of life and a positive atmosphere.

Today Christiansfeld is known for its tasty gingerbread and beautiful ceramic stoves.

The Town centre of Christiansfeld

Christiansfeld was planned and build after the same design as the first Moravian city in Hernhut. Most parts of the historical city was built between 1773 and 1812. Today the city is a living cultural monument – and a part of the city and its citizens ordinary day.

The Moravian city in Christiansfeld is a part of a world wide community of religion with parishioners in many countries. Christiansfeld is the best preserved city in Europe compared to similar communities. The buildings are still standing like they did when King Christian the VII founded the city in 1773.

Gudsageren is the Moravian cemetery. As tradition, the women are placed at the right and men at the left in the hall and therefore the women are buried at the right towards east and the men at the left towards west. Most of the tombs are alike as a symbol that all of the parishioners are equal also after their death. Gudsageren was initiated in 1774 and since then no tomb has been deleted.

The protected garden Christinero is placed southwest of Christiansfeld and was founded by the chamberman’s wife Christina Friederica von Holstein in the late 1700s. The garden is similar to a small forest with its special plants and wood species. All year Christinero is a beautiful place to visit either for a walk or on a bike.

In the garden you’ll find a boilhouse, a pavilion and a small chapel next to the tomb of Christina Friederica von Holstein. Furthermore, there are small ponds with a natural arthritic source where the water splashes up in the air.

There is a small path from Christinero to the old vicarage in Tyrstrup. Here the old barn, bulladen, is placed. The old barn from 1668 is built in oak and is the biggest oak barn that still stands on its original placed. The oak barn is preserved.