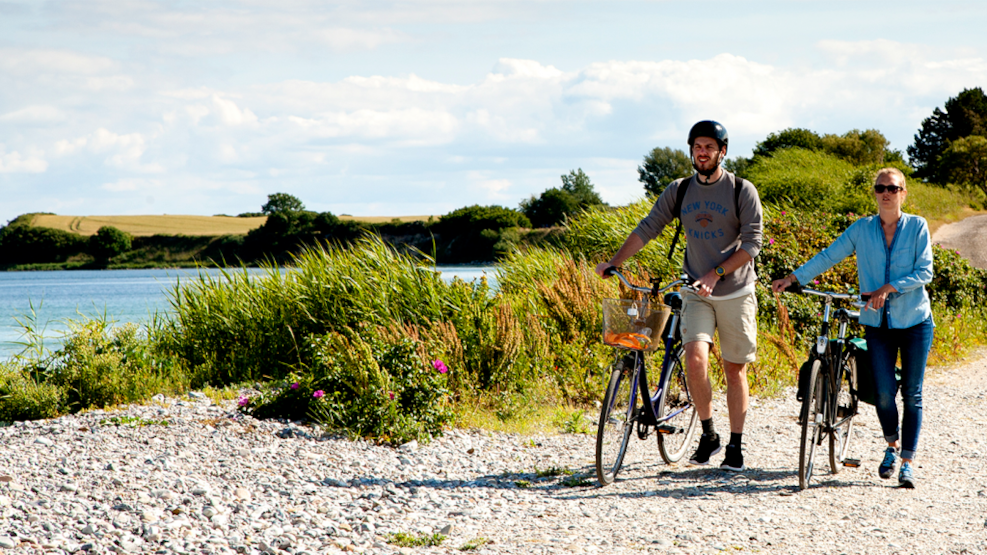 Culture and Nature from a Bicycle Saddle

Almost 62 kilometres of asphalt, 28 sights, and lots of fresh air. The regional bicycle route, Kulturringen has two stages on Samsø and both routes take bikers who are nature and culture lovers, among well-known and more unknown places on the island.

On the Havvejen, you will really begin to feel your legs. Pedalling becomes slower and your pulse will go up while you are ascending to the hilltop. Behind you there are the fi rst 30 kilometres of the m arathon-length 19. stage from Sælvig to Ballen. Ahead of you, the fi nal 12 kilometres before you reach the end.

Right here, on the top of the Havvejen, it is a good idea to park your bike, give your lungs a rest, and have a look to the left where the protected Stavns Fjord is revealed in all its natural splendour, with islands covered with grass and scrub and a rich animal life and vegetation.

20 stages, 450 kilometres
Samsø has a new bicycle route. Or rather two. The regional bicycle route, the Kulturringen, that makes use of the island’s asphalt for two of its 20 stages totalling 450 kilometres of cycling through a major parts of East Jutland. The first Samsø-stage goes from Sælvig via the north island to Ballen. A ride totalling 42 kilometres that takes you through and along a handful of great sights on Samsø, such as Kanhavekanalen, Nordby, Issehoved, Nordby Hede, and Stavns Fjord.

Cornfields with a View
Nørreskiftevej south of Ballen. Both sides of the road are fl anked by cornfi elds waving at you in the breeze. Kalundborg’s chimneys peep out at you on the other side of the water. Then the road makes a few 90-degree curves and suddenly there is a sign saying “To the beach”. And true enough, at the end of the small gravel side road, a peaceful piece of stoned beach appears with a bathing jetty, a bench, and breath-taking views.

The 20th stage of the Kulturringen bicycle route goes from Ballen to Sælvig through parts of the more unseen Samsø.