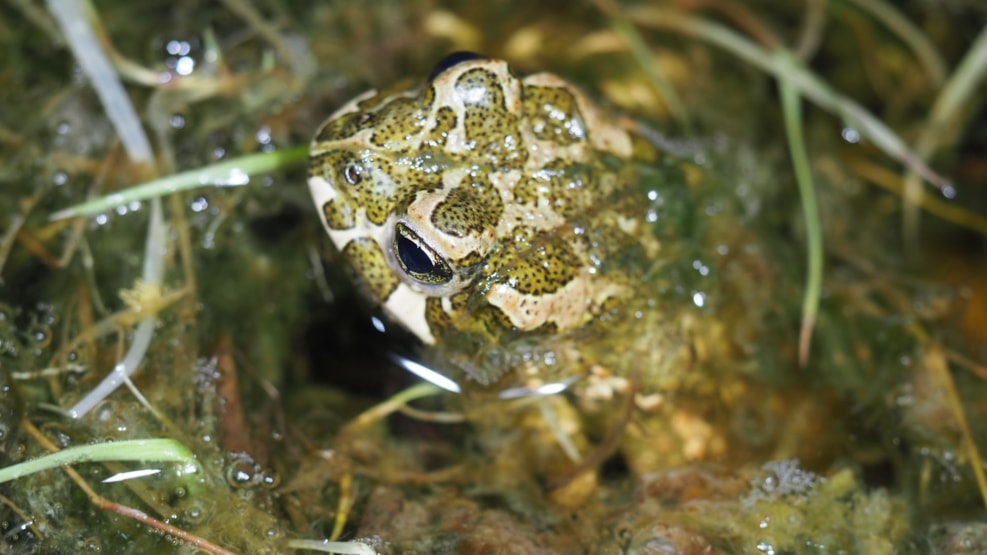 The European green toad that was close to extinction

Toads are animals that evoke emotions and for several reasons. Their appearance, habitats, toxicity and their role in many fairytales and stories of witchcraft and sorcery can be off-putting. Their interesting way of life, beautiful colours, communication and the fact that they have lived here on earth in the time before reptiles, birds and mammals fascinate us.
Text and photos by Bjarne Manstrup, head of the Nature Department on Samsø

Know your toad
Denmark has three species of toad. The most widespread, the common toad, is unlikely to be found on Samsø. It has seldom been recorded, so if it is still found on the island, it is extremely rare. The natterjack toad breeds in a few coastal water holes. Samsø’s most common toad is the European green toad, also called the ”whistle toad” due to the characteristic sound of the males.

The European green toad is widespread on most of the island and found where there are suitable water holes and village ponds. The species requires hot summers, as the tadpoles take a long time to turn into fully formed, tiny toads. In Denmark the species is not found in Jutland, Samsø being the northwesternmost corner of the species’ geographic range.

The European green toad is known for its sound and for its beautiful pattern in greenish and grey shades. The natterjack toad is olive green in colour and has a distinguishing yellow stripe running down its back. Crosses of the two species occur but they are sterile and quite rare.

Endangered species
Within the past 100 years, draining and filling of water holes and bogs have meant that the landscape has become increasingly arid. It has threatened the amphibians, who are dependent on access to water. Conservation of species and protection of their habitats have some effect but unfortunately more is needed. An ideal breeding water hole should have areas with shallow water where the heat of the sun can raise the water temperature. There must be no large shady trees, no fish, ducks or crayfish, no drains to the water hole and of course no pollution. Grazing animals may access the water hole in late summer, and it may dry out at 5-10 year intervals.

Fortunately smaller watering holes are useful too and some of the island’s village ponds have traditionally been good breeding grounds, especially when they also functioned as fire ponds and were therefore maintained. Nowadays, such maintenance takes place only to a very limited extent, and rushes and common reed often take over the ponds. Water holes in the open country are being affected likewise. There are ca. 400 water holes on Samsø. It sounds like a lot but only a few of these are good breeding grounds for toads.

Successful rescue operation
In the 1980s, things went awry. In 1984, the European green toad was probably only breeding successfully in one water hole on Samsø and the species was seriously threatened with extinction on the island. Attempts were made to clean up the village pond in Nordby in 1986-87 and three more village ponds in 1987-88. Unfortunately, the positive effect was short-lived. Duck feeding and the releasing of fish into the ponds was devastating for the toads.

Completely unexpected help came from the state in 1989, when the Danish Forest and Nature Agency offered the counties one-off financial support via nature management funds. The amount had to be used the same year. In Aarhus County it was decided that some of the money should be used to establish new habitats for the rare toad on Samsø.

The project began with an advertisement in Samsø Posten (the local paper), where landowners were offered a free water hole on their land. The interest was overwhelming and very quickly agreements were made with contractors and the work could begin. In the space of a few years, ca. 40 new water holes were established across the island - later new water holes have also been established with or without subsidies. The effect on the dispersion and prevalence of the European green toads was enormous. ”Almost too much of a good thing”, as some put it, saying they had found toads in the dog’s water bowl and on the pillow in the children’s bed. Others told how their greenhouse had attracted many toads and that the toads were now overwintering under their patios.

Intensive monitoring
Both before and after the establishment of the many new water holes, the dispersion of the toads was closely monitored, this best performed in the months of AprilMay, when the males’ very characteristic whistling sound can be heard over a distance of one kilometre. It is therefore relatively easy to detect if there are toads in an area and whether they have found a water hole. However, the breeding is only a success if, in late summer, the many small, newly-transformed toads leaving the water holes can be observed.

Experience shows that toads like to breed in new water holes. One could say that toads are pioneers and often among the first animal species to appear. It also looks as though toads - as the years go by - lose interest in a water hole. This may be due to the arrival of predators or overgrowth.

Mating and egg laying
The males often arrive in large numbers to the water holes and their concert is usually at its most intense around midnight from 10PM - 2AM. The females follow the sound and when a female arrives at the waterhole, it takes but a few moments before a male sits on the female’s back and, with his front legs, holds the female in a firm grip. In the dark of night it can happen that a male mistakenly mounts another male. A characteristic repulsive sound prompts the eager male to quickly relinquish his grip. The eggs are laid in two long strings, which the male fertilises. A female lays 8-10,000 eggs. Once this has happened the female leaves the water hole and does not return until next spring. The males remain in the water hole for as long as new females continue to come.

The work continues
There is great interest in preserving Samsø’s characteristic and beautiful toad, and there is a continued focus on preserving good breeding spots. In 2021, Samsø Municipality set aside funds for the maintenance of water holes. This is happening to preserve the toads and for the sake of many other animal species that depend on water holes as small oases in a cultivated landscape.

On toad expedition
For best results, go on a night trip in the spring months. In the past it was said that the toads would begin to croak in Nordby village pond on April 17 and for some years this has been true. Certainly from mid-April and a few months thereafter. Some days you may be lucky enough to hear the toads during the day. A good place is the water hole opposite Samsø Nature School by Langør. Here the whistling trills of the European green toad and the more elongated, snarling sound of the natterjack can be heard. When the toads live on land, it is somewhat more difficult to find them. If in luck, you may encounter them in sheltered places such as in rockeries, house foundations and - as previously mentioned - in greenhouses.