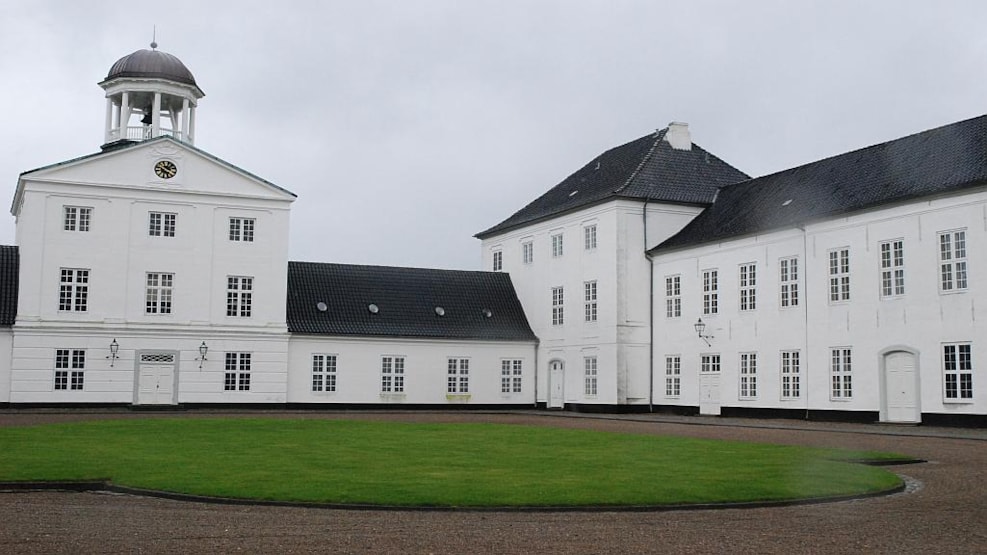 Summer resident of the royal family

Gråsten Palace is best known as the summer resident of the royal family.
The very first palace in Gråsten was a hunting and leisure palace built in the midst of the 16th century. After it burned down in 1603, a new palace was built, probably where the current palace´s south wing is now.
Shortly before 1700 the Chancellor Frederik Ahlefeldt built an impressive Baroque palace, which itself unfortunately burned down in 1757, only leaving the palace church. The current Gråsten Palace, or rather the south wing, thus originates from 1759. In 1842 the main building was added.

In 1935 the right of use of the palace was given to the late King Frederik and Queen Ingrid. Queen Ingrid was very interested in flowers and stood for the planning of the garden at Gråsten Palace until her death in 2000.

There is no public access to the buildings and rooms of the palace, except from the palace church, who has special opening hours.

Summer residence
When the royal family is in residence at Gråsten Palace, the area is closed to the public and there is no access to Gråsten Palace Gardens and Church; However, the Palace Church is still open in connection with the summer evening song etc.

2022: From 22 June to and including 10 August the palace area will be closed to the public, in connection with a royal stay at Gråsten Palace.

H.R.M. The Queen's arrival in 2022
On 18 July 18 at 10 am Queen Margrethe arrives on board the royal ship Dannebrog, which docks at Gammelhavn in Aabenraa. After this, there will be an official greeting by Jan Riber Jakobsen - Mayor of Aabenraa Municipality.

The Queen continues by car to Gråsten, where she is received approx. at 10.45 am on Torvet by Erik Lauritzen - mayor of Sønderborg Municipality and then she is driven up to Gråsten Palace.

Guard replacement
Once the palace is inhabited, a royal split flag goes to the top of the pole on the palace's bell tower and the Royal Life Guard sets up to guard. Every day there is a shift change of the Royal Life Guard. The guard starts from Det Gule Palæ, Ahlefeldtvej 5, where the new guard’s line up approx. at 11.30 pm. From here, they march through Gråsten via Borggade, Torvet and Slotsgade to the palace, where the shift will take place at 12.00

Fridays concerts
When HRH Queen Margrethe II is in residence at the palace, the Royal Life Guards Music corps participates in the change of guard on Fridays, after which a small concert is given in the palace courtyard. In 2022, this will be the case on 22 and 29 July as well as 5 August (subject to change).