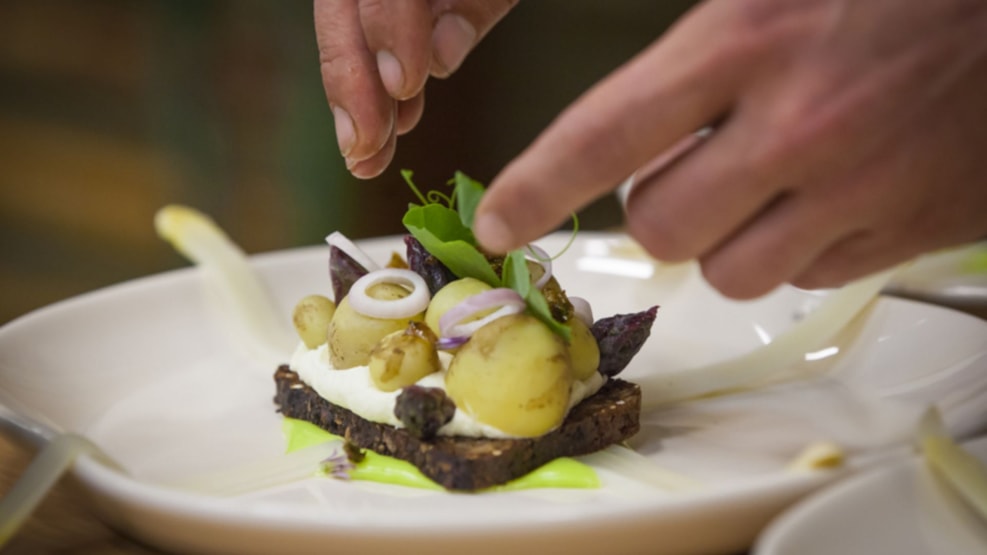 A Lot More than Potatoes

All over Denmark, Samsø is known for its potatoes, but the island’s larder contains a lot more than that. The mild climate renders formidable conditions for a flood of vegetables, fruit and berries in particular, proudly used by chefs in the kitchens of Samsø’s many restaurants to give their cuisine a magic touch.

The inhabitants of Samsø call their island the larder of Denmark, and when you visit the island for the first time, it probably won’t take long to find out why. On the sweeping highways between cosy villages with idyllic timber framed houses, fields and hills, you’ll come across up to 50-60 roadside stalls and farm shops during peak season. Here both farmers and home-growers tempt you with everything ranging from sweet berries and rhubarb, to onions, lettuce and eggs, plus succulent asparagus, freshly harvested that very morning. Don’t miss them if you happen to pass by during the spring months. In these parts, of course, there is no avoiding the humble potato. It prospers in the sandy soil and can be harvested earlier than the rest of the country due to Samsø’s proximity to water on all sides resulting in mild winters and therefore, warmer soil. This allows Samsø’s potato farmers to plant their potatoes before everybody else.

The Kattegat’s Vegetable Garden
Samsø can rightly be called the Kattegat’s Vegetable Garden and the bounteous larder has prepared the way for a flourishing restaurant scene, which, due the short distance from soil to table, attracts ambitious chefs as well as guests. The super fresh produce and, not least, its proximity is exactly what defines the cuisine of Samsø, if you ask the chefs themselves, of which there are quite a few. For an island with only 3,800 inhabitants, during the peak season you can choose between an impressive 40 restaurants, and some of them have even found their way onto the pages of the gastronomic guide, White Guide. There is everything from the classic Restaurant Behrnt at Ballen Badehotel, where guests enjoy their dinner in high-ceilinged rooms, to the playful Restaurant SAK a stone’s throw away. Do bear in mind that the beauty of the cuisine of Samsø is just as much to be found in its simplicity. Why not try a lunch with high-piled open sandwiches with a view of Ballen Harbour on a sunny day at Skipperly or the homemade baked delicacies enjoyed outdoors in the garden behind beautiful Vadstrup 1771, are experiences that I still dream about.

Gastronomic Lift
In the past few years, Samsø has seen a regular gastronomic boost making the island attractive for visitors fond of food from far and wide. You can see this from the increase in both the number of restaurants and their quality too, and from the annual open-faced potato sandwich competition where, every year since its foundation in 2012, chefs have lifted it to new heights. In Nordby, there is also the delicacy shop “Smagen af Øen” (Taste of the Island), a must for food lovers to try. In 2008, when Lars Damgaard launched his shop, there were only four items from Samsø in his assortment. Today, the shop offers everything from mustards, vinegars, beers and aquavit from more than 30 local producers.

About Nadia
Nadia Mathiasen is a journalist and writes about food and develop recipes for magazines, newspapers and TV. She is the author of the cookery books “Foodfanatic Thai” (April 2015) and Kødfri Mandag (November 2016). She is also the woman behind the foodblog foodfanatic.dk that have up to 100,000 unique readers each month.