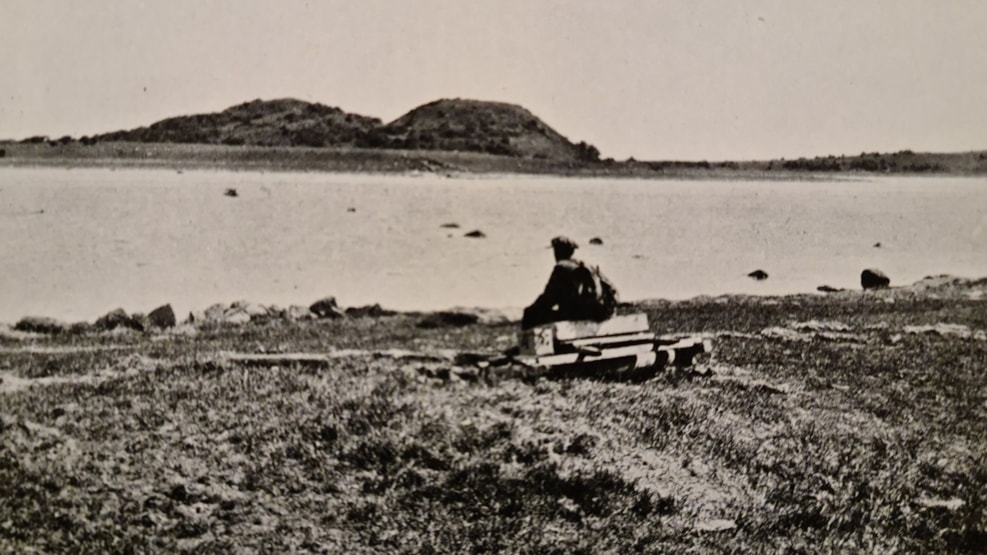 “The people of Samsø call the seas off the two opposing coasts ”The Western Sea” and ”The Eastern Sea”. It’s like a male and a female name.You always know what to expect from the first. But The Eastern Sea can rise up, erratic and tense! ”

This is what Acton Friis, a Danish painter and author, wrote in 1922. At that time, 100 years ago, Friis and his traveling companion, the famous painter Johannes Larsen, were on an extensive expedition around Denmark, which also took them to Samsø and the small islands nearby. The purpose of the expedition was to describe the country’s natural and cultural history in what became, in book form, the magnificent tome, ”De Danskes Land”.

A difference in character
Friis confides in the section about Samsø that “No other Danish region outside Djursland and Mols has touched my heart in the same way as Samsø. It is in all seriousness the Jutlandic nature, which has taken the form of an island.”

It is to a large extent the island’s coastline that makes an impression on Friis: “In few other places on our small islands have I found the difference in the character of the east and west coasts more pronounced than here. On both sides of Sælvig, in both the south and the north, the sea from the west has eaten into the core of the land, so that taller and lower cliffs stand in a line without overhangs and with steep elevation to the rear. And from here the land falls steadily eastwards towards the sheltered coast with its irregular protrusions and sheltered islets.”

Diversity apparently never goes out of style. At least not when it comes to landscapes. Samsø’s varied nature and markedly varied coastline with everything from white sandy beaches to rugged pebbly stretches are some of the things that islanders, part-time residents and holiday makers appreciate the most. In few, if any places in the country can you experience so much diverse nature within such a short distance.

It draws us
The differences occur not only along and across the landscape, but also over time. Not so many decades ago, Draget - the sometimes flooded stretch at the foot of Besser Reef - was both much longer and much deeper than it is today. A handful of years ago, Draget was completely cut off and today it is usually only a few metres or so that are barely covered by the high tide.

In Achton Friis’ time, when neither climate change nor melting poles was on the agenda, there too were visible changes of Samsø’s coast. At the foot of Besser Reef, which Friis describes as ”a dazzling strip of white sand lies the narrow reef between the shiny, opal-colored water in the fjord and the ultramarine blue sea,” lies the cliff Stålhøj, about which he writes:

”How different is the beach now compared to the last time I saw it two years ago. Its entire outline has been changed during the violent autumn storms of 1921, when they raged across the country from October to Christmas. Here, along the east side of the foot of the reef, the outer shore, from being a meadow of grass and sea wormwood around the small, shimmering lagoons about 30m in width, has been transformed into tall beach ridges of large pebbles that extend as far south as the eye can see. And even the cliffs around Udsager Hage and Staal-høj are attacked by the storm and the flood; the fine sandy seabed therefrom has been changed from a magnificent lido into a belt of sharp stones, where no foot can tread.”

Your own dwelling place
Yes, maybe not barefoot, one might add. But wearing good boots, even the most challenging parts of Samsø’s shores are worth a visit and “if you leave the reef and walk back along the south side of the fjord, step by step you leave this rugged nature behind and come closer to idyll. By the coast, where the former island Gammelholm, now a tall and steep peninsula juts out into the water, is one of the most beautiful places by Stavns Fjord. There is hardly any place in the country I would rather dwell - especially on a spring day like this”, as Friis reports.

We, who live on the island all year round, feel the change of seasons, the wind and sunshine, the tumult and tranquility. We can follow the white sandy beach which in the autumn is enveloped in large seaweed blankets. In Wellington boots we can tramp along the stretch of road from Naturskolen to Langøre, which is flooded in bad weather, and when the hard frost occasionally sets in, we can walk on the water in the middle of Stauns Fjord.

We would love to share all of this with you.
Well, apart from that very special and very personal dwelling
place we all have. You will have to find one for yourself to cherish.