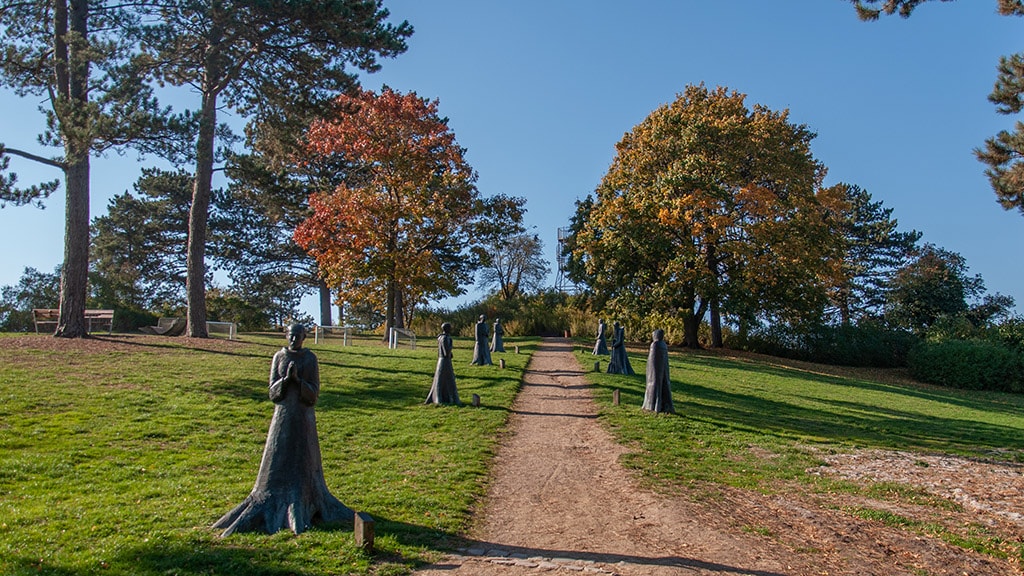 In 1997 a local artist, Jens Andersen, started converting an avenue of elms into monks. The result may be seen by everybody, who passes the very lifelike monks, a total of seven from various monastic orders.

The following monks are represented:
- Three Benedictine monks ? choir boy from grammar school; two monks, one of them carrying a branch of deadly nightshade in his hand
- Two Franciscan monks, one carrying a prayer book and a small bottle with holy water in his hands
- One Dominican monk
- One lay brother with long beard and a fork in his hands

The monks have been coated with a mixture of turpentine and linseed oil and the artist expects them to last for about ten years. This is how long you may count on seeing them as it is impossible to prevent them from rotting from the inside where earth meets air. For the same reason, casts were made of all monks and in 2006 the first monk was made in a bronze edition. The making of the bronze cast was a big expense and so arose the idea of a sponsorship project. The sponsor project is a collaboration between Næstved Development Company and Næstved Municipality. Naestved Municipality and sponsors share the cost and each pay Dkr 50,000. In return the sponsor recieve the original wooden monk. The sponsor will also be engraved on a metal plate with the company name and year. The project has been a great success and there is only one monk, who lacks a sponsor. The bronze monks can now be found on the Monk Hill.

Originally Jens Andersen was a cabinet maker, but a damaged hand made him change to another profession, and he became a gardener. After seventeen years as a specialist teacher at the Technical School of Slagelse he retired. Since then he has been able to concentrate on his hobby ? making sculptures of different materials.