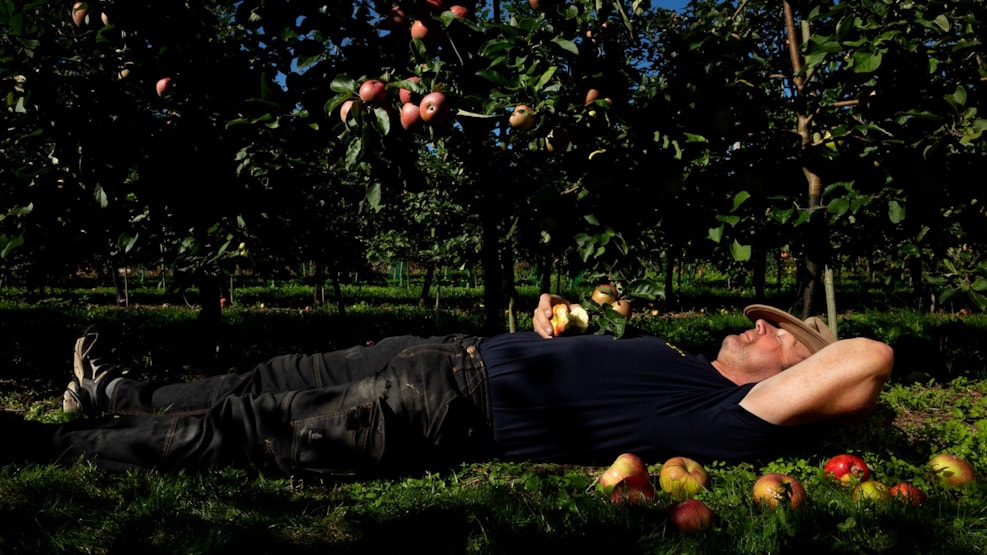 Samsø fruit at the core of the matter

On a sharp bend on Alstrupvej sits an unassuming white warehouse building. One shouldn’t be fooled by its looks as the simple exterior hides endless rows of crispy tang.

Apples have been on Carl Christian Jensen’s mind for longer than he can remember. In 1930, a little under 15 years before Carl Christian was born, his father established an orchard in Alstrup with Stauns Fjord as his nearest neighbour. And it is that same plantation Carl Christian takes care of today. ”I have been thinking about fruit, working with fruit and eating fruit for more than 50 years, and I’m not much wiser than when I started,” Carl Christian begins his story.

Essential presence
However, as the afternoon passes and Carl Christian conducts his tour, it is clear that we are dealing with a true apple expert. Still, he does have a point in claiming not to have become much wiser with time. Pome fruit is a delicate affair.

“At regular intervals, the experts change their minds about the optimal time for pruning. Some years they recommend pruning in the autumn and other years in the summer. The soil also plays a crucial role in relation to growth, as does the fickle weather, the need for irrigation, the positioning of the windbreaks, pollination and many other factors”, states Carl Christian.

In other words, someone has to be present almost constantly. And that’s exactly what Carl Christian is. ”Carl Christian and his people have planted all the 90,000 trees in the plantation by hand, so they are indeed involved from the very beginning”, states Jens Kristian Kjeldahl, who, together with his brother Søren Peter, acquired a share in the plantation a few years ago.

Fruitful cooperation
Brdr. Kjeldahl expanded their otherwise extensive business with fruit growing because it fits in nicely with their range of produce and because the supermarket chain Netto specified a need for Danish fruit, Jens explains: “We produce a score of different vegetables here on Samsø, which is primarily sold to The Salling Group. We have sorting and packing facilities, we have the transport and retail chain in order and we have a great love of quality products from Samsø. Many of the apples and pears for sale in Danish supermarkets are imported. That’s a shame, I think, when in fact we grow the best right here in the consumers’ own backyard”.

There is no doubt that the apples and pears from the plantation in Alstrup are of excellent quality. “The climate on Samsø and in particular here close to Stauns Fjord provides optimal conditions for growing fruit. There are many hours of sunshine and only rarely significant temperature fluctuations”, explains Carl Christian, while pointing to a very small apple tree planted at regular intervals among the larger trees in the many rows of the plantation.

Experiments take root
”This is a crab apple tree. We do not eat the fruits, but give them away to locals, who use them for decorations. Yet they are of great, indeed, crucial importance for cultivation. The flowers of the crab apple trees attract many bees, which help with the pollination of the other trees in the plantation”, explains Carl Christian.

In addition to the crab apples, the plantation includes classic varieties such as Elstar, Discovery, Ingrid Marie and Pigeon. “And then we experiment with other varieties that cater for consumers, who right now tend to choose the slightly larger apples. Apple trees can be grafted, enabling existing trunks to carry other varieties which we have just done with 2,500 12-year-old Cox Orange trees, and in turn, creating Red Aroma. That’s rather fantastic”, says Jens, who also draws attention to their latest experiment: “Not long ago we planted a small area with the variety Crimson Crisp. Crimson Crisp originates in the USA and is relatively unknown in Denmark. It’s a really tasty, good-looking quality apple, so we have high hopes for it ”.

From cowpat to apple pie
Apple and pear trees can be several hundred years old, but in an orchard like the one in Alstrup, old trees are not favoured. “We need healthy, young trees that give the best fruit. We replace the apple trees approximately every twenty years, while the pear trees last a good 10 years longer. When an apple tree has been standing in the ground for a while, the ground gets ‘tired’, as we say. There is an accumulation of i.a. fungal spores and you should never plant a fruit tree in the same spot as an old one”, explains Carl Christian.

In a plantation with limited possibilities for expansion, you can’t simply remove a row of trees and plant a new row next to it, so Carl Christian, Jens and the rest of the crew have to take a more arduous route. “When the trees need to be replaced, we dig up the old ones and remove a thick layer of soil. We then add fresh topsoil mixed with compost and then we are ready to plant new, young trees. The compost is full of manure from our cows and so we turn cowpats into apple pie”, Jens says with a smile.