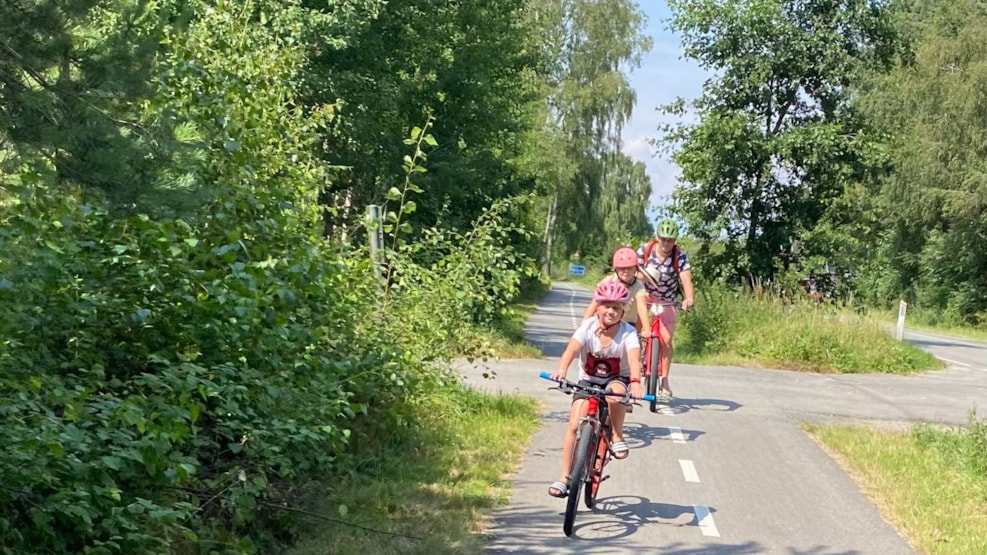 Our blended family, consisting of Thomas and Tanja and our four children, Noah, August, Frida and Emma, spent the end of July on a cycling holiday on Samsø in the fresh air and beautiful nature.
Text and photos by the Dolleris / Mikkelsen family

We went far and wide around the island on our bikes. The relatively short distances between quaint villages and the many sights en route made the bike rides manageable for the kids. On the two-way cycle path, which starts just south of Nordby and leads to Tranebjerg, we could safely cover kilometre upon kilometre.

With sounds and scents
The stretch is completely flat and a really nice ride, where all the senses are stimulated. The scents of birch, spruce and the fresh sea air also played their part in inspiring the legs to take up the challenge. The children clearly enjoyed the ride and it warmed the hearts especially when they spontaneously broke out in song.

When the stretch opened up more, and the beach meadow with grazing sheep appeared with the turquoise colours of Sælvig Bay in the background, the children’s voices quietened and it was clear that they were lost in the fantastic view. Like cycling inside a postcard. With sounds. And scents.

Plenty of space for experiences
We enjoyed several nice bike rides along the small roads where there are no cycle paths. Here we didn’t come across many cars but were greeted by many other cyclists. Bike rides on the small roads across Samsø were really nice and gave us different experiences to those you get on the cycle paths. On our trip to Besser and further out to Besser Reef, along small and winding roads, the children discovered that the small hills we encountered were doable and downhill sections were filled with laughter and competitions between the children. We stopped by the roadside picking flowers and taking small breaks. We soon found that our big boys could safely ride their bicycles on their own on the now familiar stretches.

As a cyclist on Samsø, we experienced that the other traffic adapts and leaves plenty of space when overtaking. It was safe to travel around the island with children by bike. The cyclist-friendly culture on Samsø among other road users is clearly noticeable. The infrastructure also reflects the cyclist-friendly culture on Samsø. On the road from Tranebjerg to Brundby and on to Ballen, it is reassuring that the road is clearly marked with a wide cycle track. There was plenty of space and consideration for us and our children in the traffic.

Tasty rest
One of our trips was to Langøre. It was slightly windy and grey, but that didn’t change the fact that we were going on a trip. We dressed in waterproofs and cycled along the beautiful Stauns Fjord to Langør Harbour. On the way home we paused at one of the many nice roadside stalls and ate fresh, sweet, crimson strawberries.
The many roadside stalls became our reason for several small breaks where we could quickly refuel with peas, strawberries, blueberries, cucumbers or tomatoes. The kids loved putting money in the farmer’s box and choosing the most beautiful punnet of dew-fresh treats.

Village charm
We visited most villages on Samsø, we think. We spent many hours in Ballen, where the harbour area became one of our favourite places. The small, red dinghy was used a few times and crab fishing from the pier became a recurring activity. We also visited the bathing-friendly beach, and it receives top marks from us.

We also visited Tranebjerg several times and stocked up on new waterproofs, sandals and life jackets in the town’s fine selection of shops. Tranebjerg offers both cosy cafés and shopping opportunities. In Nordby we had really nice ice cream and coffee at Casa Tua Divine Ice Cream. A nice walk around the village and around the beautiful village pond led us to the Labyrinth, where we spent another couple of cosy hours. On a trip to Kolby we stopped in Permelille and spent a fair amount of pocket money in the farm shop. We left there with everything from magnets to local jams, which we’re still enjoying.

On the beach
We brought our SUP boards with us and had the opportunity to use them in the beautiful Sælvig bugt [bay] for a few days. We also visited Ballen beach. Both beaches are beautiful with the softest sand and clearest water. On the south island, we collected handfuls of delicate, small starfish, with which the children played and for whom forts were built. The rocky beach encouraged a type of play different from that at the other beaches we had visited. By the Ilse Made freshwater spring, we found again that this beach encouraged us to discover yet another type of play and activity: finding stones with holes. All the beaches on Samsø offer something different but the common denominator for all stretches on the island is that it is beautiful and easily accessible by bike.

We learned that on Samsø you have ample opportunity for a cosy, active, enriching and educational holiday and that cycling as a means of transport makes you experience Samsø even more intensely. Samsø simply smells nice, is a visual treat and tastes great. We’ll be back!