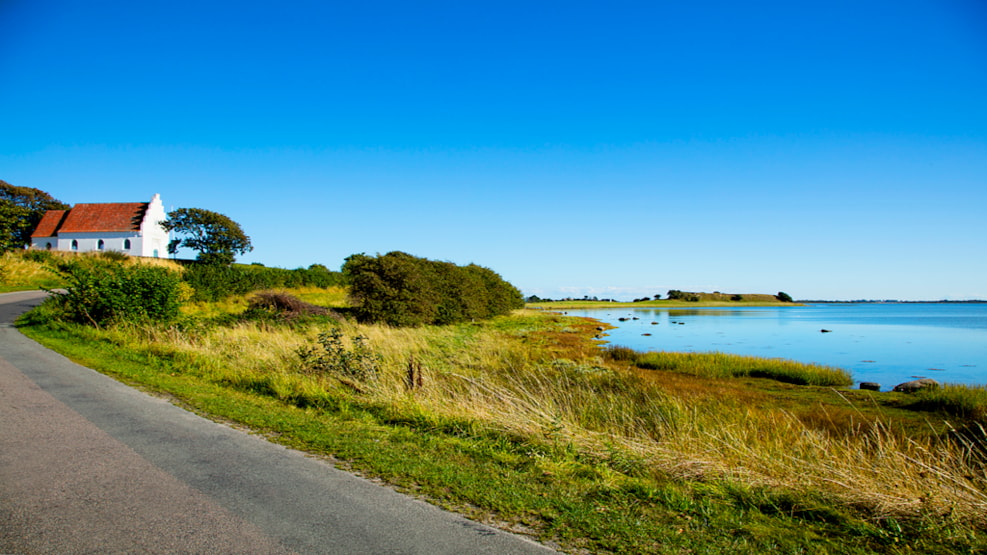 Stavns Fjord is not like other fjord landscapes, mainly because it is round, and its numerous islets give the landscape very special characteristics. Almost like a river, the deep drain, ”Hjortholmrenden”, winds through the shallow fjord. The rising tide is only about 30cm high but strong winds can cause flooding of lowland areas surrounding the fjord.

Thousands of Years of Activity
Like the hills of South Samsø, the islets in the fjord were formed during the later part of the Ice Age. Archaeological research indicates that today’s fjord landscape was flooded as a result of rises in sea levels about 7,000 years ago. There are innumerable traces of settlements and activities from the Early Stone Age and in the surrounding area of the fjord there are both dolmens and grave mounds from the Bronze Age and – as perhaps the most marked feature – Kanhavekanalen shows that Stavns Fjord and all of Samsø were powerful centres during the beginning of the Viking Age.

Protection and Utilisation
At all times, the fjord has offered good opportunities for hunting and fishing, and although there is no longer commercial fishing, it is still possible to catch garfish and fjord shrimp in the spring, and fleshy fjord flounders in the late summer.

The shallow fjord and uninhabited islets offer unique conditions for breed ing and resting for coastal birds. The birds forage here and benefit from the peace and quiet. As early as the 1920’s, a game preserve was established in Stavns Fjord, and in 1981 comprehensive conservancy regulations for public traffic in the area were laid down. The conservation and preservation, as well as the statutory order for this preservation, all aim at creating a balance between the protection of nature and its use.

In addition, the conservation of Stavns Fjord aims at creating possibilities for natural and cultural historical science.

Islets and Islands
The largest and, beyond all comparison most interesting of the islets, is Hjortholm. As it is for the other islets in the fjord, Hjortholm can only be studied from a distance, as the general public is not allowed on any of the islets. From time immemorial, the largest of these islets have been used for cattle grazing. Livestock, horses and sheep have prevented the islets from growing into scrub. Grazing has also given rise to low grass and plant vegetation and has opened the landscape for birds such as geese, ducks, gulls, terns and wading birds. In around 1990, cormorants began breeding in the fjord, and today there are colonies on Yderste Holm and on the stone reef known as “Kolderne”.

Favourite breeding paradise for Birds
Stavns Fjord has been designated as an international Natura 2000 area. One of the main areas of focus is securing good breeding conditions for birds on the ground. This includes the securing of continued demarcation and attempts to keep foxes away from the islets. Apart from the establishment of a reservation in 1926, nature protection is fairly recent, and thus development could have been very different. In the last part of the 1800’s, there were plans for damming almost the whole fjord for cultivation purposes. Today, it is probably generally appreciated that such plans were never implemented.

Discover the Fjord and the Reef
Undoubtedly, the best way to discover the fjord landscape is by taking a boat trip on the fjord in a dinghy or a kayak. Hikers can use a marked footpath on the old fjord dike leading from Stavns Harbour and up north. The path crosses Kanhavekanalen and continues to Maden at Hesselholm.
Outside of the breeding season for birds (1st April to 15th July) it is possible to walk along the tip of Besser Reef, Denmark’s longest, dry stone reef. At the narrowest point of the reef, there are only a few metres between the sea to the east and the fjord to the west. If you don’t feel like walking all the way, you can make do with a shorter walk to the hill Hønsepold, which offers a fantastic view.

Did you know?
Scattered around the bay, you see many small islets covered with grass and trees. The public has no access to the islets because they are protected and reserved for the breeding birds. However, nature lovers still have the opportunity to experience the distinctive and beautiful area when they follow the marked hiking trails around the bay.

Be aware that there is no acces in certain areas during the breeding season (April 1 to July 15).