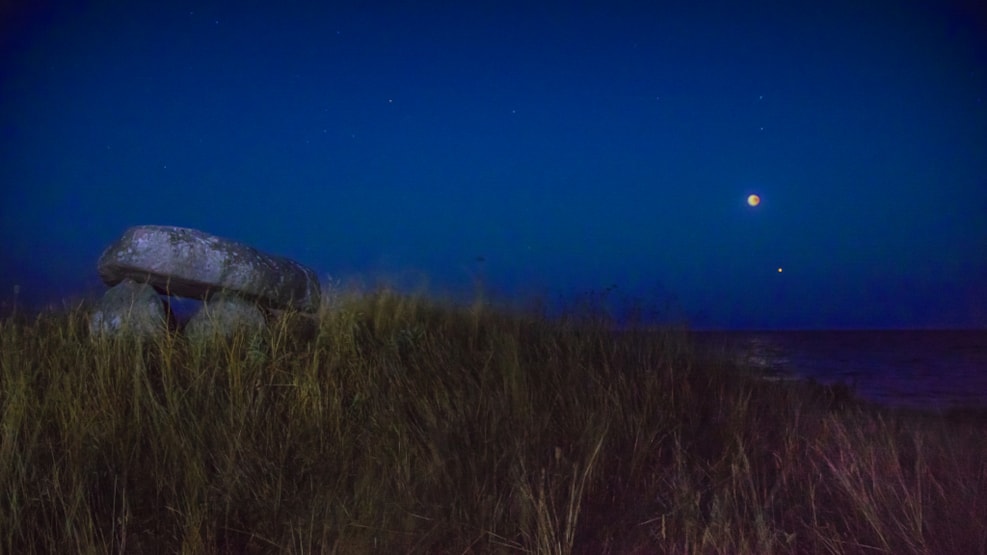 On the trail of Samsø’s burial mounds

The landscape on Samsø is full of traces of the past
– but what is hiding in the old burial mounds?

Historic greeting
The many ancient tombs appearing on the Samsø landscape prove that man has inhabited the island for millennia. The burial mounds are funeral sites dating from the earliest part of the Neolithic period 6,000 years ago and up until the end of the Viking era when Christianity was introduced to Denmark.

In the Neolithic period, important people were often buried on a small hill with stones erected around them. The stones were laid out in a rectangular formation with a large flat stone on top and the dead person placed below. Around the large stone tombs, a number of stones were placed in either a circular or rectangular formation.
The dead were provided with both weapons and food in the grave, preparing them for the journey to the afterlife. Sometimes sacrifices were made in front of the tombs.

Traces of dolmens or ‘jættestuer’ (the large stone tombs) are primarily found on private land around the Brattingsborg Gods estate. On Havvejen by Sælvigbugten there is public access to ”Niels Halses Høj”, which is a dolmen from the early Neolithic period around 3,500 BC.

Bronze Age oak coffins
In the Bronze Age burial rituals changed radically. The deceased were now placed in oak coffins with a thick layer of peat on top. Several of the coffins have been preserved until now because the peat formed a protective layer around the coffin, retaining moisture and preventing the wood from rotting. ‘Egtvedpigen’ (The girl from Egtved) was found in an oak coffin from the Bronze Age.

The tombs of the Bronze Age were often placed near a ‘beaten track’. The hills North of the camp site ‘Sælvigbugtens Camping’ are particularly beautiful.

Facts about Gravhøje:
There are over 125 burial mounds on Samsø, most of them located on the south island.
There are around 25 places on Samsø with traces of dolmens or ‘Jættestuer’ – primarily around the Brattingsborg estate.
Most tombs on Samsø sit on private land and must not be inspected without prior agreement with the owner.
One must not make changes to a monument of the past; e.g. do not litter on the mound, dig or move the rocks.