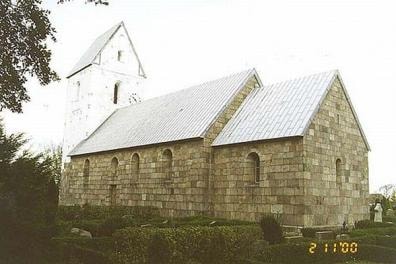 Church from 12th century close to the fjord. The church, which is situated close to Ringkøbing Fjord, is from 12th century. Chanel and nave is of the same granit ashlar which is also inside the church. The tower is late gothic. Remains of an earlier tower in the west end of the nave. Door in the south end with a beautiful tombstone with animal ornaments placed in the door. The church has an unusual wide chanel arch. The altarpiece is from 1619 and the pictures in the top are original. The other were made in 1972 by Dan Sterup Hansen. The altar table is from 1732 and the pulpit from 1603. On the south wall of the tower is a figure looking like a dragon.