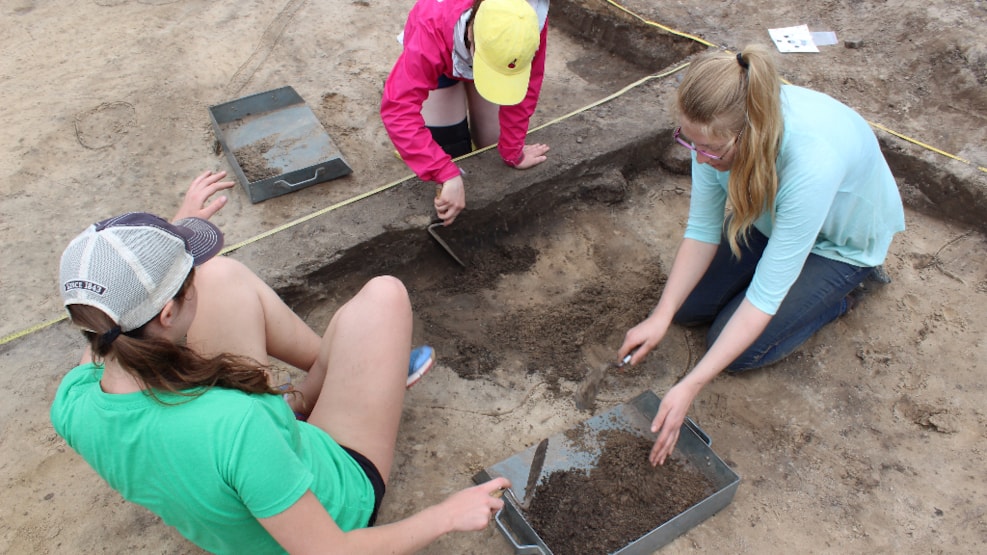 On Your Knees for the Vikings

With great caution, millimetre by millimetre of Samsø’s clay soil is being scraped away. Every single black spot is marked, measured and registered, during which the students’ knees are getting blacker and blacker and more and more painful. This really isn’t a summer vacation – or maybe it is.

From Harvard to Brundby
The young people we meet in the field have travelled all the way from the US to Tønnesminde near Brundby to spend three weeks digging out the past. The majority of them are students of the prestigious Harvard University, where Stephen A. Mitchell works as a professor of Scandinavian languages and folklore.

Since 2007, Stephen has been a central element of the summer school programme, officially named ”Viking Studies in Scandinavia”. ”Viking studies are extremely fascinating, and this period could be of interest in many different specialist fields, such as languages, religion, philology, archaeology and folklore,” Stephen explains. “An important part of my work is integrating legends and myths into the more scientific archaeological discipline and the combination of these two angles certainly contributes to making our summer schools so attractive”.

Madeleine Woods, a student of folklore and archaeology at Harvard, agrees. Summer courses give me a unique opportunity to expand my study with new dimensions – both in theory and in practice, and all of it centred on a very fascinating historical period.”

The Historical Centre
The weeks on Samsø are primarily set in the excavation site near Tønnesminde east of Brundby, the archaeological pivotal point of three successive summer school programmes.

“The actual start dates back to 2010 when an investigatory team found several objects indicating activity in the Viking Age,” excavation manager Peter Jensen of Aarhus University explains. “During the three years we have been here with Harvard, we have excavated more than one thousand square metres, and have found indications of activity here since the Early Stone Age”.

The numerous archaeological finds testify that this area was particularly active around both the Iron Age and the Viking Age, and there are indications that Tønnesminde housed a forge shop and was engaged in textile production and in trade, including soapstone from Norway.

Everything plays a part in creating a clearer picture of what Samsø was like in the Viking Age. “From historical sources, from several place names still existing on the island and, of course, from the Kanhave Canal, we know that Samsø was a very important place during the Viking Age,” Stephen explains, and then, with fierce enthusiasm, quotes from the poems of “ the Elder Edda” from where we learn that Odin practised sejd (witchcraft) on Samsø.

Rugbrød and Potatoes
”Samsø is so wonderful,” the three girls exclaim almost all at once, when asked if it isn’t a little boring to spend three weeks in the summer on a dusty field. Fortunately, it turns out that they do get a chance to explore other parts of the island.

”We live in Ballen, so we use the beach and the harbour a lot. We have taken some beautiful bicycle rides and hope to sail in sea kayaks,” says Catie Pate, also a student of Harvard. “It’s cool to be far away from home together with other students who, just like myself, are fascinated by history,” Catie explains.

The Americans are particularly impressed by the island’s nature and energy initiatives, Hannah Krystal of Yale University explains: “It’s rather fantastic that such a small island holds so much history and so much varied nature, and the food is something very special. Some of us have pretty much fallen in love with rugbrød and potatoes.”

Facts
• The summer school is a partnership between Harvard University, Aarhus University and the Moesgaard Museum.
• The summer school lasts eight weeks, including three weeks on Samsø.
• The course is subdivided into three parts; history and archaeology; literature and folklore; and fieldwork.
• USA Today, one of the biggest US newspapers, rates the summer school on a top-7 list of the most unique study programmes abroad.