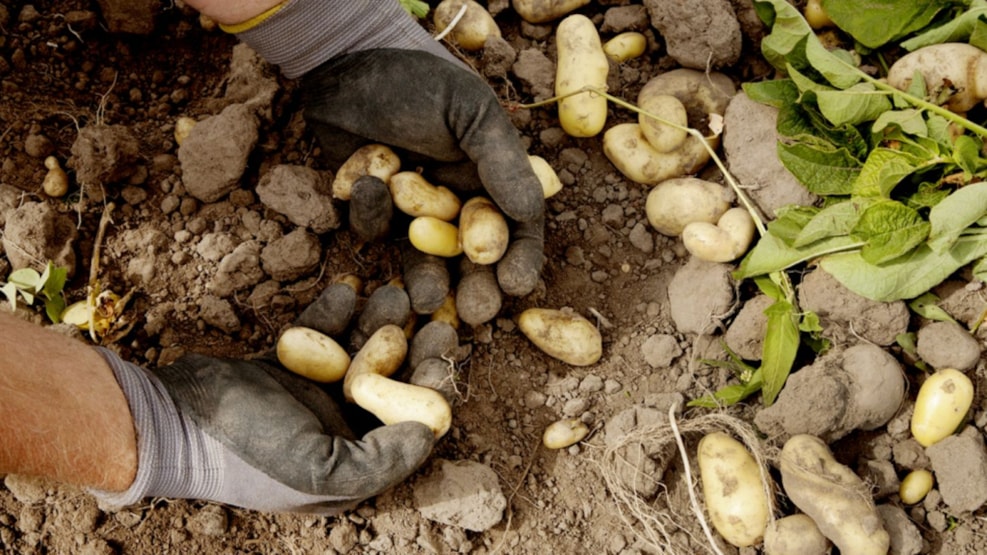 Winter Vitamins from the Soil

If you visit Samsø in September and October, you will be met by purple coloured red cabbage fi elds, orange pumpkins peeping out from between the large leaves and endless rows of yellow and red onions. Wonderful and healthy vegetables on their way to dinner tables all over the country.

Danish Champion of Onion Growing
Large-scale onion growing has formed part of Samsø’s agricultural culture since the beginning of the twentieth century, and today the island’s onion growers are part of the top élite of the country. When the Growers’ Association of Danish Onions organises this onion competition every year, it is more the rule than the exception that Samsø takes a few medals for things like “the most elegant onion”, “the biggest onion”, and “the best quality” as some of the disciplines are called.

One of those who can boast of several gold and silver medals is Jens Kjeldahl from the big agricultural enterprise Brdr Kjeldahl. He takes a qualified guess as to why Samsø of all places, is just so good with onions. ”Onions really like to grow in a dry and sunny environment, and that is exactly what we have on Samsø We have less attacks from diseases and pests, which are probably due to our microclimate and the fact that we are on an island surrounded by water. We also have decades of experience and lots of zest to experiment with new varieties and growing methods”.

One Cutting and a Drying, please!
Onions are one of the few vegetables that can be supplied fresh to consumers throughout the year. In March and April, the pre-cultivated onions are put into the soil where they are looked after and cared for during the summer. In September, just before the harvest, the first thing to do is to cut the tops with an instrument much like a big lawn mower. Then the onions are taken up and placed on the surface of the field, where they pre-dry in open air for a couple of weeks. Next step is collecting the onions and putting them into a large onion dryer, after which they are finally put into storage. In the storehouse the temperature and air humidity are maintained, giving optimal conditions for the onions to stay succulent and good until the summer when the whole process starts all over again.

110 hectares – or the equivalent of 220 football pitches – that is the size of the onion growing area on Samsø. About one third is red onion and the remaining two thirds are yellow onions. Measured in weight, this makes an annual production of 6,600,000 kilos of Samsø onions, which are primarily sold in Netto, Føtex, and Bilka.

The Wholesome Root
The somewhat rough surface of the celery root hides a delightful, nutritious taste experience rich in vitamin C, vitamin B6, magnesium, potassium, manganese, phosphorus, and luteolin. All of the good stuff that helps your body and brain to stay in top form. And more and more Danes are becoming aware of that.

As Jens explains, ”It is quite obvious that we are experiencing an increasing demand for celery root, and it really deserves it because it is a wonderful root crop that can be used in dishes prepared in the stove as well as in mash, for chips, and for many other things. It tastes excellent and its nutritional value is really high”.

On Samsø, there is an annual production of 1,000,000 celery roots, and producers make an effort with every single root to ease their preparation. ”Such a celery root requires some work before it is ready for the pot or the oven. Before the roots are sent to the supermarket and to the family kitchen, we wash them thoroughly so that they only need peeling. After all, nobody likes to see soil everywhere”, Jens says. An

Orange Greeting from the Realm of the Rising Sun
”In a certain way, Samsø and Japan are not so far from each other. Not in degrees of latitude anyway. In terms of climate there are also several similarities, and that is the reason we are successful in cultivating Hokkaido pumpkins on Samsø. A pumpkin that originates from the Japanese island of the same name”, Jens explains.

In May, when the plum trees are blossoming, the pumpkins are sown in the fields. If the weather conditions are good with sufficient rain and lots of sunshine and heat, it won’t be long before the pumpkin shapes up. In early September, the harvest can begin. Pumpkins should be treated with much care. If they are knocked, they rot quickly and must be scrapped. This is the reason why all pumpkins on Samsø are harvested by hand. The pumpkin is cut away from the plant with lopping shears and are then carefully placed in boxes, before being transported to the shops.

The largest sale of Hokkaido pumpkins is before Halloween, of course, but the pumpkin can be purchased during most of the autumn. It has a somewhat sweet taste – almost like a nut – and the Hokkaido is really good when baked in an oven, for mash, in cakes, or for pumpkin soup. On Samsø, more than 20 hectares are grown with Hokkaido, so it should be possible to catch a glimpse of the orange balls in September and October.

Farming on Samsø
Almost half of Samsø’s area is used for agriculture – well over 6,000 hectares. 2/3 of this area is used for crops to be harvested with a combine harvester and the remaining 1/3 is for vegetables and berries. On Samsø, there are many small fields with a great variety of crops, e.g. potatoes, onions, red cabbage, cabbage, Savoy cabbage, strawberries, celery, pumpkins, sweet corn, green beans, blackcurrant, white and green asparagus, wine, cereals, rape, seed grass, sprouts, herb seeds, beetroot, broccoli, and flower seeds.