Can facts be funny? We seem to think so. From weird Danish traditions and letters, old flags and amusement parks to bike- and swim-friendly facts, get to know Denmark a bit better with these 17 fun facts!

1. One of the happiest countries in the world

Fun facts about Denmark have to begin with happiness - we're known for it! Denmark has been named the world's happiest country on numerous occasions, and remains to be very near top of the UN World Happiness Report, we're currently second. If you want a few insider tips on how you can get a bit more happiness in your life, you should check out our guide on 12 ways you can get happy in Denmark. 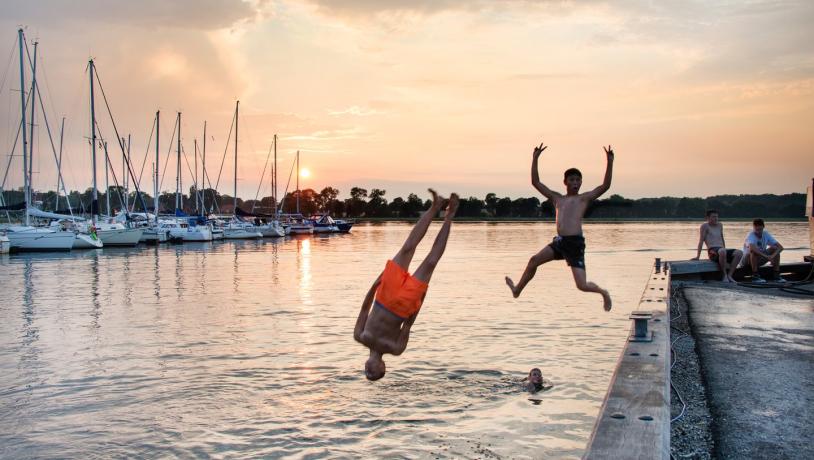 2. The Danish language has no word for "please"

Don't think we Danes are impertinent if we forget to say please when asking for a favour, we're simply not used to using it in a sentence as there is no direct translation for "please" in Danish.

3. The oldest flag in the world

First acknowledged in 1219, the Danish flag "Dannebrog" remains the oldest state flag in the world still in use by an independent nation. Turning 800 years has never looked better - and we'll celebrate it in true Danish birthday fashion, with a bunch of flags of course.

4. We have a word for that cosy feeling of togetherness, hygge

Hygge is a term that goes far in illuminating the Danish soul. In essence, hygge is about creating cosy social gatherings and intimate get-togethers with family and friends. It's the feeling of wellbeing and a warm atmosphere. You can also feel the notion of hygge in the streets of Copenhagen - literally. Walk down some the old narrow, cobbled streets, dating back several hundred years. These streets invite you to take intimate walks next to colourful houses, small coffee shops and vintage boutiques.

In the 1840s, some Austrian bakers settled themselves in Denmark and introduced the beloved pastry. For this reason Danish pastry is actually called "wienerbrød" or "Viennese bread" in Denmark. But hey, let's keep this well-hidden secret between us, shall we? Because, we've certainly perfected the craft of pastries. Just saying. 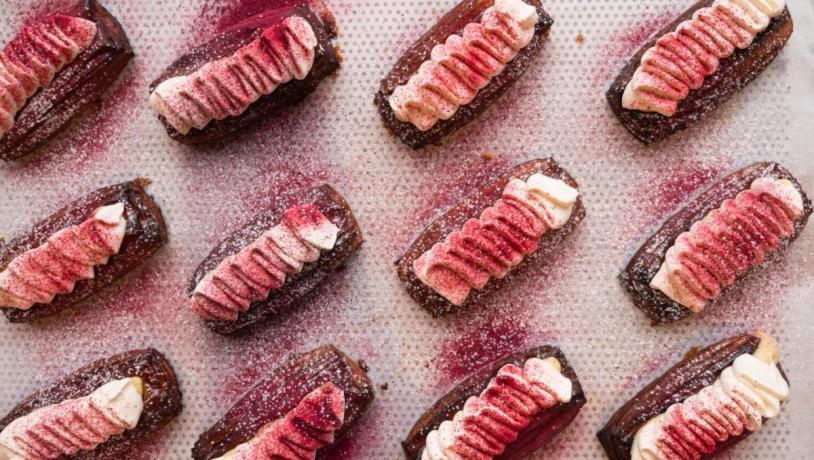 6. How's this for a fun fact about Denmark? We don't have any mountains!

Denmark is known around the world for its bike culture, and the fact that our country is quite flat is definitely an advantage in this matter - we never have to bike uphill! But we also have more than 12,000km of cycle tracks and lanes throughout the country which makes biking in Denmark a safe and respected way to travel. We even enjoy cycling so much that 75% continue biking all through winter and we have a Cycling Embassy.

7. More than 50% of Copenhageners cycle to and from work every day

8. The Danish alphabet has 3 additional letters: Æ, Ø, and Å

The Danish language is said to be one of the most difficult ones to learn due to a bunch of silent letters and complex pronunciation. But we've added a bit more to the challenge. Let us introduce you to three letters you won't come across in the English alphabet: Æ, Ø and Å.

9. We have some weird Danish traditions

We don't mind admitting that some of our Danish traditions seem rather weird to the modern eye, as they include batting at a black cat in a barrel at the annual carnival "fastelavn" and burning a witch on a bonfire at Sankt Hans (midsummer's eve). But don't worry, we've toned down the craziness a bit, so nowadays the barrels are simply decorated with cut out versions of black cats and the bonfires only burn doll versions of witches. Phew.

10. You'll find the two oldest amusement parks in the world in Denmark

If this isn't a fun fact about Denmark, we don't know what is! Denmark is home to the world's oldest amusement park, Bakken, just a 20 minute train ride from Copenhagen Central Station. The second oldest, Tivoli Gardens, is right next to the same station smack bang in the centre of our vibrant capital. Both of them are a great starting point for a fun-filled day - and that's just a fact! 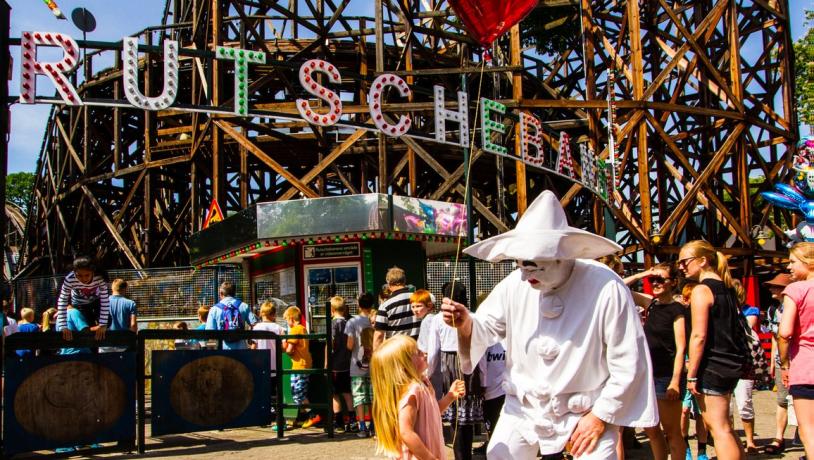 The world-famous LEGO® brick was invented by Dane Ole Kirk Christiansen in the town of Billund in 1949. Nowadays you can visit the original LEGOLAND® and learn more about this renowned toy at LEGO® House. We're also proud of the fact that since 2018, LEGO’s toy plants and other leafy pieces have been made with sugarcane-based plastic. That's right. And, they're close to perfecting the bricks made with recycled plastic. Fun and friendly to the planet! What could be better?

This means that there are plenty of opportunities for you to go on an island getaway! Some of our favourite and most popular island retreats are the islands of Ærø, Rømø, Bornholm, and Læsø. Bornholm and Samsø were voted as the EU's most sustainable islands back in 2020, so if you like green living, look no further.

13. You'll never be more than 52km from the ocean in Denmark!

If you're looking for a real challenge while you're in Denmark, try not to see the ocean at one point. This is one challenge you'll most likely be unable to complete as you cannot be more than 52km from the ocean in Denmark.

14. The Copenhagen harbour is clean enough to swim in

There are plenty of sandy beaches within 30 minutes of the city centre, but you can also just take a dip in harbour as the water is clean enough to swim in. You'll find a handful of harbour baths along Copenhagen's harbour, such as at Islands Brygge, Kalvebod Brygge, and Nordhavn. Oh and by the way, you'll also find clean harbours in our other big cities - Aarhus, Odense and Aalborg.

15. You can drink water from the tap

Not only are our city harbours clean enough to swim in, but we can also drink water straight from the tap. You can enjoy this privilege as well during your stay as you'll find some of the world's cleanest tap water in Denmark.

16. Denmark became the first country to legalise same-sex unions in 1989

And same-sex marriage was granted in 2012. If you want to celebrate love in all its forms, you ought to join in the annual pride celebrations happening throughout the country. 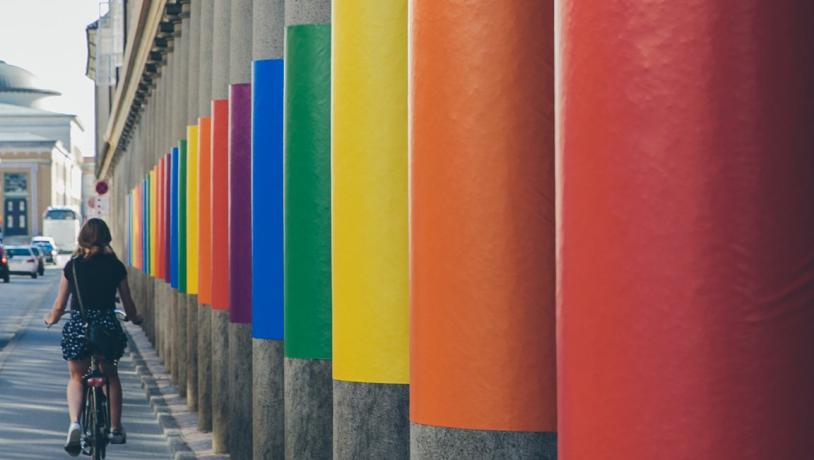 17. There is an unofficial Danish law for "no one is better than the other"

It is called "Janteloven", and it plays a key part of the Danish culture and mentality where everyone is accepted and equal. Janteloven is also a main reason why Danes tend to say that it goes well for us (Denmark as a whole) when for instance Nikolaj Coster-Waldau plays Jamie Lannister in Game of Thrones or Lukas Graham's album reached No. 3 on the Billboard 200.